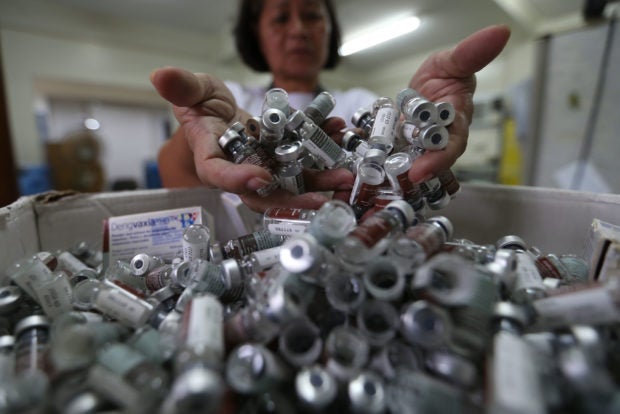 The  government on Friday said it would seek a full refund of about P3.5 billion it had spent for an antidengue vaccine and wanted its manufacturer to set up a fund to cover hospital bills racked up by individuals who would suffer from a severe case of dengue after getting the vaccine shots.

The government last week suspended the massive dengue immunization program after the French pharmaceutical giant Sanofi Pasteur, maker of the Dengvaxia vaccine, disclosed that it could cause severe symptoms in people who have had no previous exposure to the mosquito-borne virus.

“We will demand the refund of the P3.5 billion paid, and that Sanofi set up an indemnification fund to cover hospitalization and treatment for children with severe dengue,” Health Secretary Francisco Duque III said in a news conference at Malacañang.

The Department of Health (DOH) on Friday said more than 830,000 schoolchildren, up from an earlier estimate of about 734,000, had received the first of three doses of the vaccine since March 2016 in the world’s first mass antidengue immunization program.

Duque said, at the very least, the government wanted reimbursement for the vaccines that it had not used, estimated at about P1.4 billion.

Duque said the DOH had formed a task force to review the dengue immunization program and would hire an additional 30 “surveillance officers” who would be deployed to hospitals in the regions where vaccinations were carried out to collect data over the next five years.

“We will continue to be vigilant in monitoring our children for any adverse event following immunization, and will strengthen the readiness of our public hospitals in attending to any severe dengue cases that may occur,” he said.

Quoting Sanofi, Duque said Dengvaxia was meant to provide a 30-month protection against dengue to those vaccinated, including those who did not have any prior dengue infection.

But he said the case of a 12-year-old girl in Tarlac province who received all three doses but showed symptoms of severe dengue seemed to have defied that.

She was first inoculated in March 2016 and received the third and last dose in August this year, the health secretary said.

Asked whether the case showed the effectiveness of the vaccine was questionable, Duque said: “Most certainly.”

The DOH task force will thoroughly review the immunization program and the procurement of the vaccines, he said.

“This shall guide the DOH in responding to the safety concerns on Dengvaxia, and how to proceed with the vaccination program to ensure safeguards and prevent similar incidents,” he said.

The task force shall be comprised of top officials from the DOH central office and the affected regions, the Food and Drug Administration, Philippine Health Insurance Corp. (PhilHealth), and the National Children’s Hospital.

He said he expected a “lengthy” process in getting the government’s money back and the task force’s legal team would be looking into the contract with Sanofi and the company’s accountability.

“It’s gonna end up in a longdrawn litigation,” he said.

Duque urged officials of the previous administration involved in the program “to come forward and to say his or her piece and to explain.”

“Otherwise, there will be too many speculations and sometimes there are innuendos, very toxic speculations or innuendos,” he said. “So to prevent that from snowballing, [it] might be good to say what really happened. Because I’m sure they actually meant well. I have no doubt that they did mean well.”

Duque said PhilHealth would pay up to P16,000 for each dengue case, but Sanofi should shoulder any excess amount.

But he also said that PhilHealth might ask Sanofi to reimburse all its dengue expenses.

“I mean, you know, that’s something that can be explored. It’s not an improbability,” he said.

The Coalition for People’s Right to  Health (CPRH), a group of health professionals and advocates, on Friday called for an independent investigation of the botched vaccination program and for “heads to roll.”

“Complete accountability must be (demanded) from Sanofi and all current and former government officials who connived in the planning and implementation of this program,” said CPRH convenor Dr. Eleanor Jara in a statement.

As health professionals, Jara said they were “appalled” by the negligent implementation of the program despite the concerns raised by the members of the health sector well before its rollout.

“Given the magnitude of this, both the government and Sanofi should exhaust all its resources to educate the public on what to watch out for. They should likewise provide health services to all those affected,” she said.—WITH REPORTS FROM KRIXIA SUBINGSUBING, AP AND REUTERS