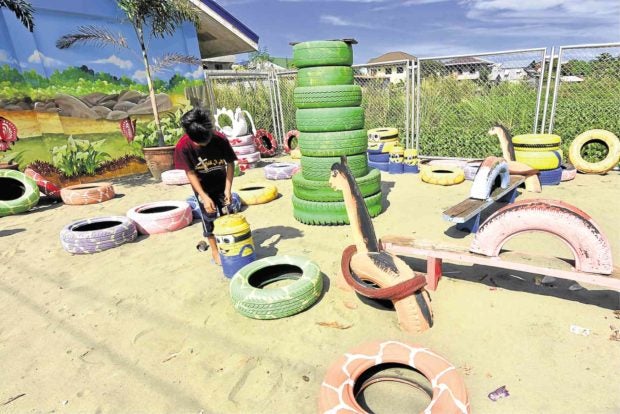 ECO FRIENDLY Discarded tires find use at a day care center in the village of Malued in Dagupan City.—WILLIE LOMIBAO

CAGAYAN DE ORO CITY— Authorities have raised to P2.5 million the reward for any information that would help investigators identify the the killers of the president of the University of Science and Technology of Southern Philippines (USTP).

Sally Hans Barbaso, National Bureau of Investigation regional director in Northern Mindanao, said the agency was hoping that the reward money would embolden people who might have known the identity of the gunmen who attacked USTP president Ricardo Rotoras on Dec. 2 to come forward.

Rotoras was shot and killed outside his house at Golden Glow North Subdivision in Barangay Carmen here. The slain university official also headed the Philippine Association of State Universities and Colleges for four consecutive terms.

Hours after Rotoras was killed, Mayor Oscar Moreno announced that the city government was offering a P1 million reward to informants who could identify the suspects.

Another P1 million was offered by members of the local chapters of the Free and Accepted Masons of the Philippines, a group in which Rotoras was an active member.

On Wednesday, the city council approved the release of P500,000 as additional reward money.

Councilor Teodulfo Lao Jr., said the council proposed to allot the amount to the reward hoping someone would have the courage to work with investigators to find the killers.

Barbaso said their initial investigation revealed that at least four persons were involved in the attack. Two served as gunmen, another acted as a lookout stationed near the subdivision’s perimeter fence while the fourth suspect drove the getaway vehicle.

It was also possible that a second lookout was monitoring Rotoras while he was attending a Christmas party in a hotel hours before he was killed, he said.

“This is a well-planned and well-financed operation,” Barbaso said.

He said witnesses told investigators that the suspects went to the area twice, with the first visit aimed at familiarizing themselves with the surroundings.

Barbaso said residents turned over a makeshift ladder that the suspects used to climb over the subdivision’s fence during the first visit. A second ladder, made of coconut lumber, was found near the crime scene following the attack.

“It was probable they (suspects) were [casing the site],” Barbaso said, adding that investigators were informed of the discovery of the first ladder after the attack.