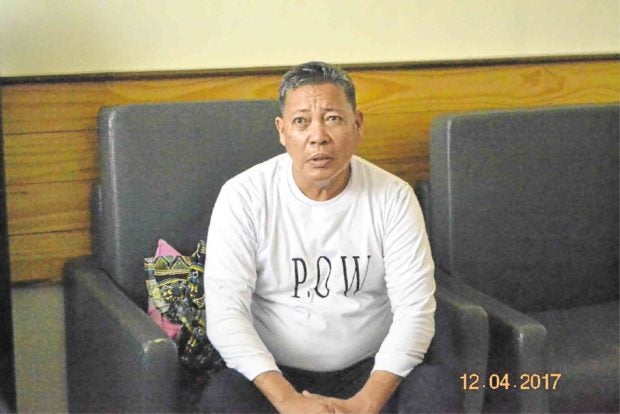 KIDAPAWAN CITY—Wearing a white sweatshirt printed with “POW” (prisoner of war), Police Officer 1 Bristol Catalan Jr. appeared to have lost a lot of weight as he walked over to his wife he had not seen for almost four months. He hugged her and shed tears of joy.

In between sobs, Catalan thanked those who facilitated his release from communist rebels who held him captive in the hinterlands of North Cotabato province.

The New People’s Army (NPA) turned him over to third-party facilitators on Tuesday in Barangay Bagumbayan in Magpet town.

Catalan said it was the greatest gift he ever received for Christmas.

“I’m feeling great today,” Catalan said. “I am very happy; I have the greatest gift,” he said. “I am now with my family,” he later told the Catholic Church-run radio station dxND.

Catalan, an intelligence officer at  Makilala town police, was driving a motorcycle in Barangay Katipunan on Aug. 16 to bring his children to school, when armed men blocked his path and abducted him.

Catalan’s wife could hardly find words to describe her happiness over her husband’s freedom.  “He is our only breadwinner. We are again a happy family,” she told reporters.

Church leaders described Catalan’s release as a “gesture of hope” for the resumption of peace talks between the government and the National Democratic Front of the Philippines.

“I remain hopeful peace talks will resume and the government to reconsider its decision to put an end to the peace process,” Kidapawan Bishop Jose Colin Bagaforo told the Inquirer.

Later, at the bishop’s house, Catalan thanked the prelate again, kissed his hands and cried. “We are happy that you are alive. Have a merry Christmas,” the bishop told the policeman.

Supt. Bernard Tayong, speaking for the North Cotabato police, said Catalan told him how he was tried by the rebels’ “kangaroo court” and found him innocent of any crime against the people.

“My good standing in the community I served had offset a guilty verdict,” Tayong quoted Catalan as telling him.

Catalan said the rebels took his 9 mm service gun but returned his mobile phone and other personal items when he was released.

He said Catalan would undergo a debriefing process to hasten his recovery.

Catalan said he was treated well by his captors, some of them young, and many of them women. He said, though, they were constantly on the move to avoid the military.

The NPA said it freed Catalan on humanitarian grounds.

The decision, which was read in front of the receiving party, was followed by a send-off ceremony with members of the NPA’s “Hukbong Bayan,” in black uniform and in full battle gear, conducting a parade.