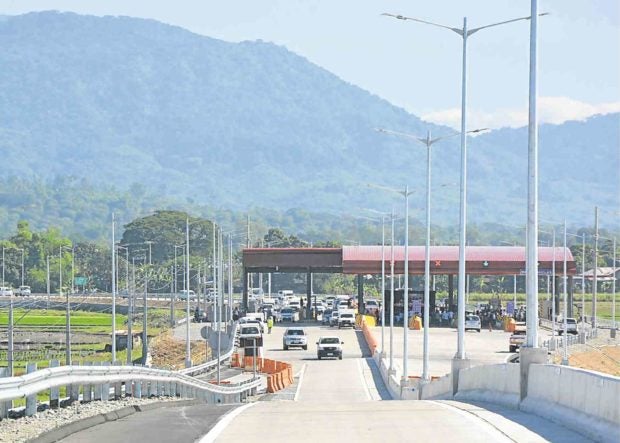 POZORRUBIO, Pangasinan — Motorists bound for Northern Luzon would be traveling faster to their destinations, with the opening on Wednesday of the Pozorrubio exit of the Tarlac-Pangasinan-La Union Expressway (TPLEx).

“We have been surprised at the magnitude of the impact of TPLEx on the economy of Northern Luzon,” said Mark Gabriel Dumol, president of the Private Infra Development Corp., shortly after the opening of the TPLEx interchange in Barangay Bobonan here.

The 88.85-kilometer expressway, which traverses the provinces of Tarlac, Pangasinan and La Union, has reduced travel time from Tarlac City to this town from 2 hours and 30 minutes to 45 minutes.

This means that a motorist driving from Balintawak in Quezon City via the North Luzon Expressway (NLEx) and the Subic-Clark-Tarlac Expressway (SCTEx) could reach Baguio City in three hours and 30 minutes on a normal day.

“It has been literally a game changer because suddenly, there are thousands and thousands more Filipinos who want to get a taste of the north. It’s now easy to go there, unlike before,” Dumol said.

He said a TPLEx interchange in Sison town in Pangasinan, which was not in the original plan, would be completed in March or April next year.

Once the Sison exit is completed, it will partly solve traffic congestion on Bued Bridge especially during the holiday rush, he said.

In December 2014, the influx of tourists to the north created monstrous traffic jams in Sison and nearby Rosario town, taking motorists at least 15 hours to travel from Metro Manila to Baguio City.

Traffic slows down as motorists reach the two-lane Bued Bridge, according to Sison Mayor Danilo Uy.

The problem begins when motorists encroach on the southbound lane just to get ahead of slow-moving traffic, he said. —Gabriel Cardinoza