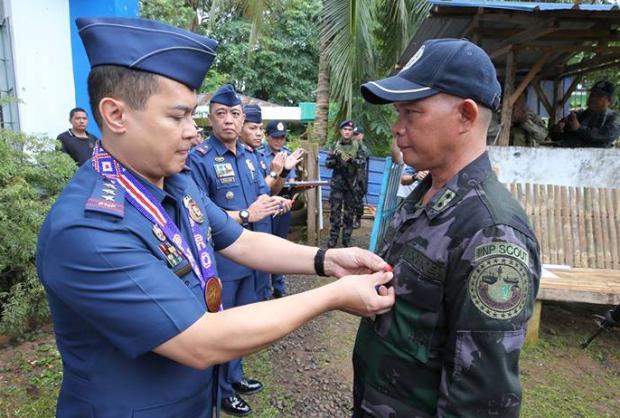 The Philippine National Police awarded a Medalya ng Kagalingan (Medal of Merit) to each member of the Binuangan Municipal Police Station in Misamis Oriental who repelled around 200 communist rebels who attacked their post last Dec. 3, despite being outnumbered, according to a PNP statement issued on Wednesday.

One of the attackers from the New People’s Army (NPA), a group recently branded by President Rodrigo Duterte as a terrorist organization, fired a grenade from an M203 launcher, wounding four officers: Senior Insp. Dante Hallazgo, the station chief, and three of his men – SPO1 Ramonito Zambas, PO3 Alberto Bernadas, and PO1 Joshua Satur.

The medals were pinned to the officers by Deputy Director General Archie Francisco Gamboa, chief of the PNP directorial staff, who also handed out financial assistance to the officers.

Gamboa inspected the damage to the station and checked on the condition of Bernadas, who was still in the hospital as of Wednesday.

“He commended them for their meritorious heroic acts, professionalism and commitment they displayed during the critical situation,” the PNP Public Information Office said.

Police have yet to confirm if there were casualties on the part of the NPA. /atm