Priest recalls dismantling bomb for IS in Marawi 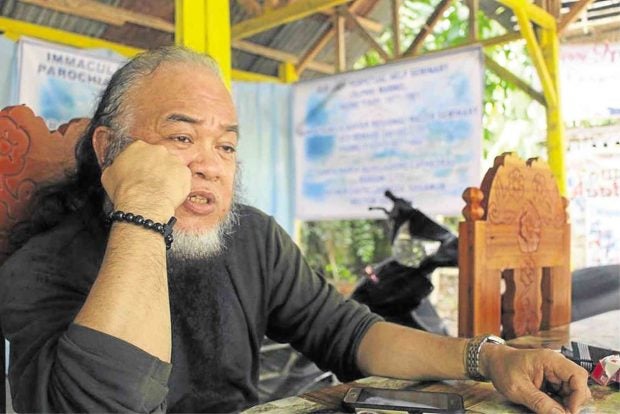 Soganub recounts his ordeal in the hands of IS followers
in Marawi City.—EDWIN FERNANDEZ

Norala, South Cotabato—Marawi City vicar general Fr. Teresito “Chito” Soganub recalled how he learned how to dismantle unexploded bombs from air strikes during his days as a captive of the Islamic State (IS)-inspired Maute group in Marawi.

The priest, who spoke of his ordeal when he returned to his hometown here on Thursday, said the gunmen had asked him to dismantle a bomb, using a hacksaw, the most difficult task ever given to him as a captive.

“I told them it might explode if I tampered with it, [but] they said no, it will not explode, we are here beside you. If you die, we all die,” he said, quoting one of the gunmen. The bombs, he said, were as big as acetylene tanks.

“I was trembling the first time, but later it was easy,” Soganub added.

The unexploded bomb was turned into improvised explosive devices, which the gunmen used to rig every corner of the Bato mosque, the central base for the local terror group during the fighting, and where hostages, whose number grew over the days, were kept.

Soganub said the mosque had concrete walls that could withstand bombardment.

Beside the mosque were classrooms, which also had thick concrete walls.

“Omar (Maute) and Abdullah (Maute) and Isnilon (Hapilon) were there most of the time,” he said. “We were also kept there to take care of food supplies and cooking. There were fox holes and they created running trenches so we can move from one building to another,” said Soganub.

Hapilon, the acknowledged “emir” of IS in Asia, and the Maute brothers were later killed.

Still traumatized more than two months after his escape, Soganub said he never expected to live when he and 12 other hostages were made to form a line in the middle of a basketball court at Bangolo Plaza
during their capture.

“I thought they would massacre us,” he said. “[There were] only the 13 of us and about 50 armed men in the plaza,” he told Inquirer on Thursday.

But the 57-year-old priest said nothing of the sort happened. Instead, he said his captors treated him well.

“They were respectful of me, they never harmed me,” he said. “This is not Stockholm syndrome, I’m just telling what I saw.”

He said the hostages and the Maute gunmen “ate together, we slept together.”

Soganub and Dansalan College teacher, Lordvin Nobleza Acopio, were able to flee on Sept. 16, when the soldiers came very close and the Maute gunmen were in panic.

They dashed to freedom shortly before midnight, amid explosions and bullets flying from all directions.—EDWIN FERNANDEZ