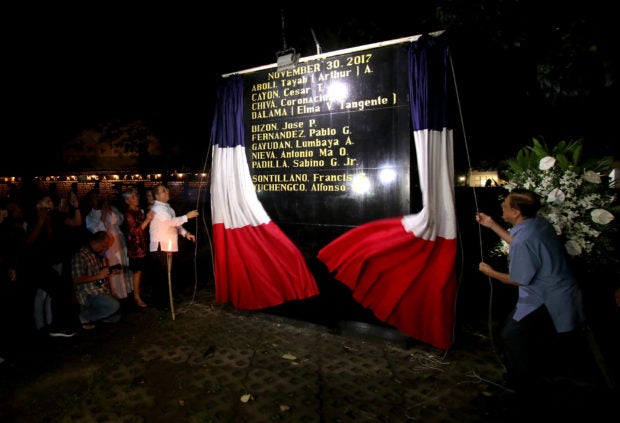 ‘BANTAYOG’ RITES The names of 11 heroes and martyrs added to the Wall of Remembrance at
Bantayog ng mga Bayani in Quezon City are unveiled during Thursday’s ceremony. —RICHARD A. REYES

The names of 11 patriots were added to the Bantayog ng mga Bayani’s Wall of Remembrance in Diliman, Quezon City, on Thursday to honor their heroism and resistance to the Marcos dictatorship.

The 11 martyrs and heroes “gave their sweat, blood, talents and even lives to regain our democracy and freedom,” said Wigberto Tañada, chair of the Bantayog ng mga Bayani Foundation.

“Many of us already know the truth of our history, and [with this shrine], we would no longer forget the atrocities and injustices committed by the Marcos administration,” Tañada said.

The rites coincided with the 154th birth anniversary of Andres Bonifacio, founder of Katipunan that launched the Philippine Revolution in 1896, and nationwide protests for and against a revolutionary government that critics believed could set a precedent for another martial rule.

Former political detainee and guest speaker Reynaldo Vea said there was greater importance now to recount the stories of martial law as a safeguard against future abuse.

“There is real danger of historical amnesia or worse, revisionism, which is now being actively pushed by several quarters of society,” Vea said.

Among those honored was Alfonso Yuchengco, founder of the Yuchengco Group of Companies and a former Philippine ambassador.

He was recognized for “keeping his independence from the Marcos regime, despite the risks and for (contributing) to the growth of Philippine economy despite the difficulties posed by the crony system of the Marcos dictatorship.”

Yuchengco was also cited for helping draw international attention to the Marcos regime’s abuses through his involvement with the opposition movement, Light-a-Fire.

Also recognized was the late Catholic priest-activist Jose Dizon for “serving as chaplain of street parliamentarians … and for helping (empower) the poor in rural areas to take part in the movement for genuine change.”

Dizon led various protests against the injustices of martial law, including the Justice for Aquino, Justice for All movement that was launched after the assassination of opposition Sen. Benigno Aquino Jr. in 1983.

This brings to 298 the names etched on the Bantayog monument, which was erected in 1986.

Last year, the names of 19 heroes and martyrs, including Inquirer editor in chief Letty Jimenez Magsanoc, were engraved on the Bantayog monument. —KRIXIA SUBINGSUBING