UP student wanted to be a doctor 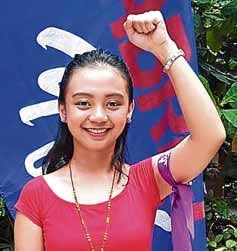 She wanted to be a medical doctor but decided to take the road less traveled that on Tuesday cost her life.

Josephine Anne Lapira, 22, a University of the Philippines (UP) Manila student, died in what the authorities reported as an encounter between New People’s Army members and government forces in Batangas province on the evening of Nov. 28.

Lapira, a former biochemistry student from Marikina City, was identified by the military as the 15th fatality (one of five women) in two gun battles in Nasugbu town. She died while being treated in the hospital.

“Violence against women does not choose its victim,” Lapira had said in one of her speeches as deputy secretary general of Gabriela Youth Manila.

She also served as a UP College of Arts and Sciences representative to the University Student Council from 2016 to 2017.

Alana Cortes, a fellow student-leader at UP Manila, described Lapira as a warm and “easy-to-get-along-with” person.

Lapira had wanted to be a doctor to help the sick as some of her family members had cancer, she said.

“[T]hat’s why she pursued medical studies. She loves giving practical advice. She is very responsible in the student council and other organizations. She will not sleep just to finish a requirement,” Cortes said.

She said she had known Lapira since March last year, after they both ran under the Asap-Katipunan party.

Joshua Musico Sagdullas, spokesperson for Bagong Alyansang Makabayan (Bayan) in Eastern Visayas, said on Facebook that the group was mourning the death of Lapira.

Lapira’s friend Al Omaga also posted a tribute for Lapira on Facebook calling her “a figure of activism in (UP Manila)” who tackled mostly about women’s issues and gender emancipation.

Lapira spent six years in college, one year in Development Studies and five years in BS Biochemistry. She was about to graduate but earlier this year, Lapira became a full-time activist, Omaga said. She went to serve in the mountains of Southern Tagalog this August.

“Her death is proof that the revolution is alive–that people are actually holding their lives on the line to pave way for an alternative society free from exploitation. But then again, her death is a reminder that there is war in the countryside, and like any other war, people die in battle. We may grieve and mourn, but only to rise up again, take up their bodies, and continue the fight,” Omaga said calling Lapira “no less than a hero.”

“Our nation’s history is one written in blood and (Lapira’s) selflessness has brought us closer to a new chapter in this long and arduous epic,” Sagdullas said.

“(She has) unwavering principle regardless of circumstance. That’s why I love you, idol,” San Juan previously wrote on Facebook to vouch for Lapira who was then running in the University Student Council elections.

The Inquirer went to the wake of Lapira on Thursday evening but grieving relatives disallowed any interview.

Her remains were brought from Batangas to a small funeral chapel in Marikina City.