Revilla: Plunder evidence points to Napoles and Cambe, not me | Inquirer News

Revilla: Plunder evidence points to Napoles and Cambe, not me 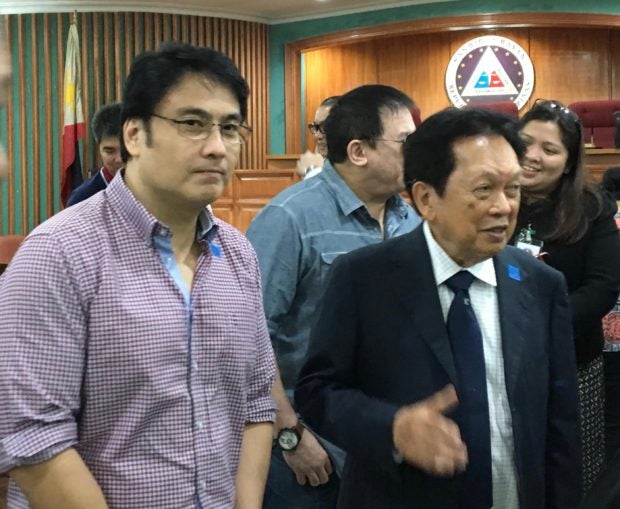 Former Senator Bong Revilla Jr. has asked the Sandiganbayan to dismiss his P224.5-million plunder case, saying the Ombudsman’s evidence could only implicate his chief-of-staff Richard Cambe or businesswoman Janet Lim-Napoles – but not him directly.

Revilla through his lawyer, former Solicitor-General Estelito Mendoza, raised these arguments as he asked the First Division to grant him leave to file a demurrer and release him from detention after three and a half years.

The actor-politician was accused of receiving kickbacks, through Cambe, in exchange for his endorsement of Napoles-linked nongovernment organizations for projects funded by his Priority Development Assistance Fund.

In a 57-page motion, Revilla said the “ones solely responsible” for what turned out to be “ghost projects” were “Benhur Luy and his fellow whistleblowers under the direction and management of Napoles.”

He said there was “not a scintilla or iota of evidence” regarding his part or knowledge that the NGOs would not implement his PDAF-funded projects.

The motion claimed the Ombudsman investigators asked local government officials “leading questions” portraying Revilla himself to be the one who gave away the agricultural projects.

As for the kickbacks, Revilla claimed that “no evidence” was presented that these amounts really ended up with him even if Cambe allegedly received kickbacks on his behalf.

“The answer is apparently not disputed: ZERO,” read his motion.

For him, the prosecution only “endeavored to prove… the amount of ‘kickbacks or commissions’ received by Cambe and that the amount was received in behalf of Revilla,” without tracing the money trail.

“Revilla does not admit the amount allegedly received by Cambe, and empathically denies that whatever that amount may be, that Cambe received it in his behalf,” the motion read.

It was quoted as saying “there are no direct proofs that [he] received commissions/rebates out of the proceeds of his PDAF… but the circumstances persuasively attest that accused Revilla on several occasions received money from the illegitimate deals.”

Focusing just on the lack of direct proof, Revilla took this to mean that the court made “a finding only as to the amount received by Cambe,” but not him.

The motion also argued that the Ombudsman failed to meet the requirement of Republic Act No. 7080, or the plunder law, to show the “overt and criminal act” through which Revilla could have amassed ill-gotten wealth.

On the contrary, he reiterated that his act of endorsing PDAF projects could not be “criminal” because this was authorized and required by pertinent legislation and regulations of the Department of Budget and Management.

Among the evidence that could be robbed of “probative value” on this ground was the testimony of Anti-Money Laundering Council bank officer Leigh Von Santos, Revilla said.

Prosecutors cited the AMLC report on the Revilla family’s bank transactions in claiming they made numerous deposits of at least P87.63 million from 2006 to 2010 within 30 days from the dates when the senator allegedly received his commissions as listed in Luy’s ledger.

The former legislator also argued that AMLC never asked the Court of Appeals to issue a freeze order on his or his family’s accounts on the ground of unlawful activity.

Revilla added the case would be hard-pressed to meet the P50-million threshold for a plunder conviction.

The bail ruling earlier stated that P103 million of the amount was “strongly proven” thanks to the whistleblowers’ testimony on personal knowledge.

Yet, Revilla argued this could be pared down to only P36.5 million, as the other P66.5-million tranches were not supported by his endorsement letters or Special Allotment Release Orders.

Napoles and Cambe already filed their respective motions for leave to file their demurrers ahead of Revilla on Nov. 24.

A demurrer tests the sufficiency of the prosecution evidence without rebuttal by the defense. If the court grants the demurrer, the trial would be cut short and the accused would be acquittal without having to present his own evidence.

While Revilla is the sole politician to remain detained for plunder since the Ombudsman began filing the serious charges in June 2014, four other plunder cases remain pending in the Sandiganbayan.

Mendoza had previously secured the freedom of former President Gloria Macapagal-Arroyo, whom the Supreme Court acquitted of plunder in July 2016, and Enrile, whom the SC allowed to post bail on humanitarian grounds on August 2015 while his plunder case is pending. Another high-profile client, resigned President Joseph Estrada, was convicted of plunder in September 2007 but pardoned by Arroyo a month later.