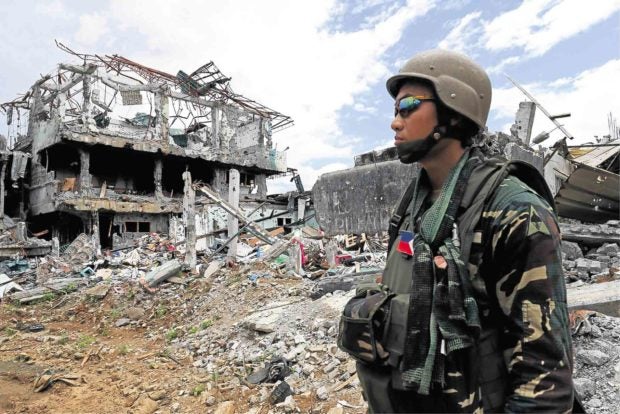 The five-month war between government troops and terrorists led by the Maute group has left Marawi City’s business district in ruins. —JEOFFREY MAITEM

MARAWI CITY — The top aide of slain terror leader Omarkhayam Maute has reportedly been recruiting residents, especially young men, in Lanao del Sur province as the Maute terror group tries to rebuild its forces after its defeat following a five-month battle  in this provincial capital, a military official said.

Col. Romeo Brawner Jr., deputy commander of the military’s Joint Task Force Ranao, said one Abu Dar was among the Maute group’s “second line” leaders who escaped the war and was now trying to reorganize the Islamic State (IS)-inspired group that laid siege to Marawi on May 23.

“The [reported] recruitment efforts for training of new fighters of IS-Maute terrorist group were monitored in the towns of Piagapo, Lumbacaunayan and Sultan Domalondong,” said Brawner, noting that he received the information from locals.

He said Abu Dar, who carried a P3-million bounty on his head, had been using images of Marawi’s devastation to win recruits.

“Despite being defeated, the [IS-inspired group] did not learn its lesson,” said Lt. Gen. Carlito Galvez Jr., commander of the Western Mindanao Command.

Supt. Ebra Moxsir, Marawi City police chief, said information reaching his office showed that Dar’s group was constantly moving and was not staying long in a single area. He said the group was also monitored in the towns of Butig, Marantao, Tugaya and Tubaran in Lanao del Sur.

He said most of the new fighters whom Dar had recruited were relatives of Maute gunmen, who were killed in the fighting here from May to October.

Omarkhayam and Abdullah Maute were two of the seven Maute brothers who led the fighting and tried to foil the arrest of Abu Sayyaf leader Isnilon Hapilon, reported to be the emir of IS in Southeast Asia.  The brothers were killed separately in the course of the five-month war.

In October, Omarkhayam was killed with Hapilon in one of the fiercest battles the government waged to retake Marawi. The deaths of both leaders signaled the end of the war, which killed more than a thousand people, 164 of them, policemen and soldiers. The military said 822 alleged terrorists and 47 civilians were also killed.

Vice Gov. Haroun Al-Rashid Lucman of the Autonomous Region in Muslim Mindanao said he received reports that Abu Dar was accompanied by about 40 men.

“The military should check on the reported recruitment activities and not let the terrorists regroup,” said Marawi Mayor Majul Gandamra.

In General Santos City, authorities arrested in a drug bust on Monday a Pakistani national and his Filipino wife who were suspected of financing the activities of another IS-inspired group, Anzar Al-Khilafa Philippines (AKP).