De Castro: Testimony vs Sereno not due to emotions 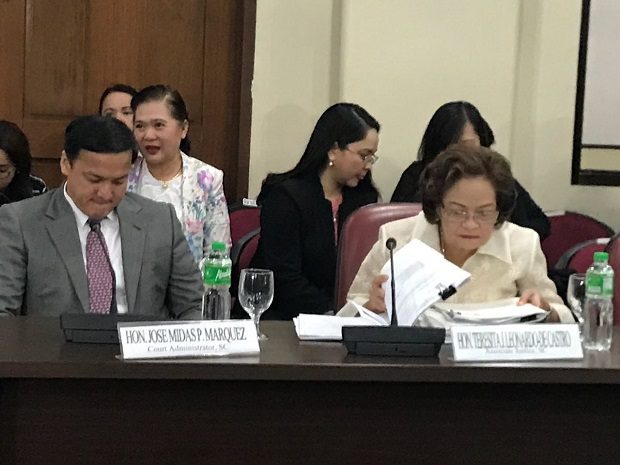 “I can’t stand idly by when the power of Supreme Court is being undermined… I should speak up.”

During the resumption of Sereno’s impeachment hearing on Wednesday, Siquijor Rep. Ramon Rocamora asked De Castro how she felt about the appointment Sereno, considering that both of them vied for the chief justice post in 2012.

President Benigno Aquino III appointed Sereno despite being the most junior among those were shortlisted to replace the late Chief Justice Renato Corona.

Other committee members protested Rocamora’s line of questioning, saying he should accord the justice respect as her presence in the hearing was “unprecedented.”

“I can’t stand idly by when the power of Supreme Court is being undermined and when our decisions reached by the collective wisdom of the justices of Supreme Court are being set aside or changed. I should speak up. What kind of a justice am I if I just accept what’s happening that’s not in accordance with the constitution and the law,” she added.

De Castro stressed that she was not just overtaken by her emotions when she disclosed Sereno’s questionable decisions to the impeachment panel.

“Itong pag-appoint kay Chief Justice Sereno, anong magagawa ko? The President appointed her. She was nominated by the Judicial and Bar Council. What should I do?,” she said.

De Castro testified before the committee that Sereno issued an administrative order in 2012 that contradicted a resolution of the en banc on the opening of a regional court administrative office. /cbb