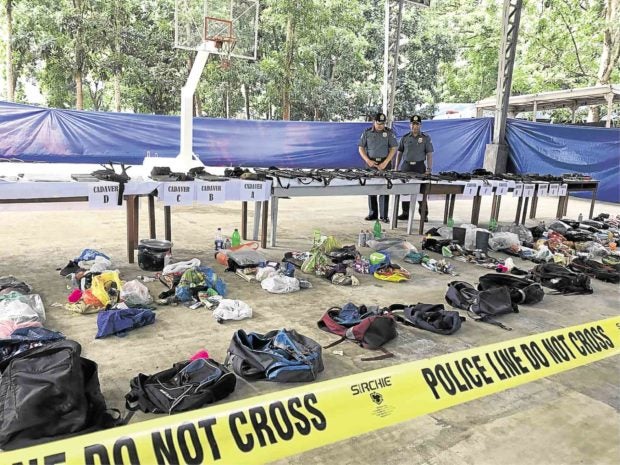 NASUGBU, Batangas — Fifteen suspected members of the communist New People’s Army (NPA), including a female student of the University of the Philippines Manila and four other women, were killed in a battle with government troops in Batangas province on Tuesday night.

Government officials said the slain rebels comprised the western Batangas command of the NPA, armed wing of the Communist Party of the Philippines (CPP).

Maj. Gen. Rhoderick Parayno, commander of the Army’s 2nd Infantry Division, identified one of the fatalities as Josephine Anne Lapira, 22, from Marikina City, who died while being treated at Jabez Hospital in Nasugbu.

“We received information that she was from UP. I’m just not sure which (campus),” said Senior Supt. Alden Delvo, provincial police director.

A relative of Lapira confirmed to the Inquirer that she was from UP Manila.

On Wednesday afternoon, families of those killed sat on the wall of a roadside ditch in front of St. Peter’s Funeral Home here waiting for authorities to complete the autopsies.

Not seen for long time

Among them was Leony Aytona who was there for her son, Glen, 22.

“I didn’t know he was with them [NPA]. We’ve not seen each other for a long time since my husband and I got separated and I went home to Bacolod,” Aytona said.

The other fatalities were from Calaca and Lemery, both in Batangas, and Cavite province, according to other sources.

The clash at around 8:30 p.m. on Tuesday capped a series of skirmishes since last week between the rebels and the Philippine Air Force (PAF), which conducts counterinsurgency operations in Batangas province.

Maj. Engelberto Nioda Jr., commander of the PAF 730th Combat Group, said authorities were tipped off to the presence of vehicles “full of armed rebels” in Nasugbu, 65 kilometers south of Manila.

Delvo said joint police and military checkpoints were set up on the routes to Calatagan and Balayan towns after they received information about the vehicles.

“We were expecting them to pass by that road, as that would be the usual exit route, but they instead took a turn and headed toward the direction of Tagaytay [Cavite]. There were also checkpoints there,” Delvo said.

In a press conference in Batangas City, police said they seized seven rifles, a pistol, two laptop computers and an M79 grenade launcher along with backpacks that contained toiletries and some food.

Delvo said the intelligence information they received was that a three-vehicle convoy carried the rebels.

But the authorities encountered two – an unmarked jeepney and a van – in the adjacent villages of Aga and Kaylaway, along the dimly lit part of the Tagaytay-Nasugbu highway.

“The jeep did not stop [for inspection] and [the passengers] opened fire at our troops,” Delvo said.

The firefight prompted a 2-kilometer chase toward Barangay Kaylaway near a golf course here, according to Nioda.

“It seemed like a convoy. First a Montero [carrying PAF troops], then the enemy’s van, then three more [government] vehicles, the jeep, then us,” Major Nioda said in a phone interview.

Five people from the jeep and nine from the van were killed.

A female store owner in Barangay Aga said she hid in her kitchen when the shooting started.

“We heard men shouting. After that, people moaning. We only went out when the shooting stopped,” she said.

The resident said she saw a body a few meters away from the jeep, suggesting an attempt to escape.

Nioda himself was also wounded and is recuperating at Fernando Air Base in Lipa City, Batangas. Also wounded on the government side were 2nd Lt. Eliseo Insierto of the Air Force and two Philippine Army soldiers.

Among those killed was the supposed team leader identified only as “Maro” who was found on the van’s front seat, Delvo said.

Another suspected rebel identified as Victoriano Almario, the alleged driver of the jeepney, was last reported being treated at Medical Center Western Batangas in Balayan town.

The authorities said the slain rebels were the ones involved in the series of clashes in the villages of Utod and Bunducan, also in Nasugbu, after soldiers overran an NPA camp.

Nasugbu Mayor Antonio Barcelon said the town, particularly the villages of Bulihan and Mataas na Pulo, had long been “influenced” by communist insurgents.

The regional military chief, Brig. Gen. Ernesto Ravina, said the operation was “anchored on the pronouncement of the President on the termination of peace talks.”

On Nov. 24, Mr. Duterte told soldiers to expect “virulent” clashes with the NPA after he scuttled peace talks with communist rebels. He accused the 3,800-member NPA of carrying out attacks despite his peace efforts.

Talks to end the conflict, which the military says has claimed 30,000 lives, have been conducted on and off for three decades. —With a report from AFP /atm /pdi