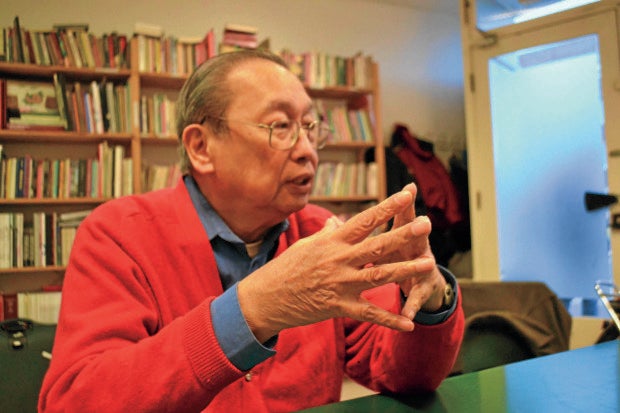 This was how Communist Party of the Philippines (CPP) founder Jose Maria Sison described President Rodrigo Duterte, who had said he would not form a coalition government with the communists following the termination of the peace talks with the National Democratic Front (NDF).

In his latest tirade against the President, Sison on Saturday disputed Duterte’s statement that the present administration would never coalesce with the communist group.

Sison said as early as 2014, Duterte had been pushing for a coalition government with the CPP, quoting a 2014 Philippine Daily Inquirer report, during the time when the President was still mayor of Davao City.

Sison said Duterte wanted to forge a coalition with the CPP and the Moro National Liberation Front (MNLF) if ever he was elected president.

In the 2014 report, Duterte said: “I am open to a coalition with revolutionary forces and other patriotic forces. I guarantee that it will not be a communist government as it will retain the basic fundamentals of a democratic society.”

In a speech before scout rangers in Camp Tecson in San Miguel, Bulacan on Friday, Duterte said “as it was shaping up during our talks, I already noticed the trend of the thoughts of the other side. And when I summed it all, reading from all previous working papers it would sound like a coalition government. That’s why I said in the previous days I cannot give you what I do not own and certainly a coalition government with the Republic of the Philippines is pure nonsense.”

READ: Duterte: PH gov’t will not coalesce with communists

Sison said that Duterte now is “being carried away by fascist dictatorship through charter change” under the guise of a “pseudo-federal system.”

“Duterte does not mind being proven a big liar on the question of coalition government. He thinks that he can move on from success to success at political swindling,” Sison, chief political consultant of the NDF, said.

Sison also tagged Duterte, his former student, as a “consistent political swindler and demagogue who depends heavily on lying.”

“He has vowed to wage a war on illegal drugs. But the problem has become far worse than before because his own family is involved in large-scale drug smuggling and his regime protects the biggest drug lords and protectors at the level of governors and generals, while engaging in the mass murder of more than 14,000 poor suspected drug users and pushers,” he noted.

The communist leader also swiped at the chief executive’s association with the “extremely corrupt families of the Marcoses, Arroyos, Estradas and others to add their bailiwick votes to his own bailiwick vote in order to get 39 per cent of the total vote in 2016 elections,” despite his vow to wipe out corruption.

“In exchange, Duterte has let them off the hook on the charges of plunder and corruption. He himself has amassed a great amount of undeclared wealth by collecting huge campaign funds in billions of pesos from 2014 to 2016,” Sison said.

“As a president in a rush to become a fascist dictator, he expects to have limitless opportunities for bureaucratic corruption like his idol Marcos, especially in overpriced infrastructure projects, government purchases and cheap sale of raw materials,” he added.

Sison had accused Duterte of “sabotaging” the peace process, saying that the President had thrown away all efforts of both panels, as well as the Royal Norwegian Government’s, because of his “scarce, shallow, and defective” knowledge of the negotiations.

Duterte signed on Thursday Proclamation No. 360, which terminates the peace negotiations with the NDF and ordering the Presidential Adviser on the Peace Process all the talks and meetings with the group.

Duterte’s decision came after the series of New People’s Army attacks that have affected civilians. /jpv