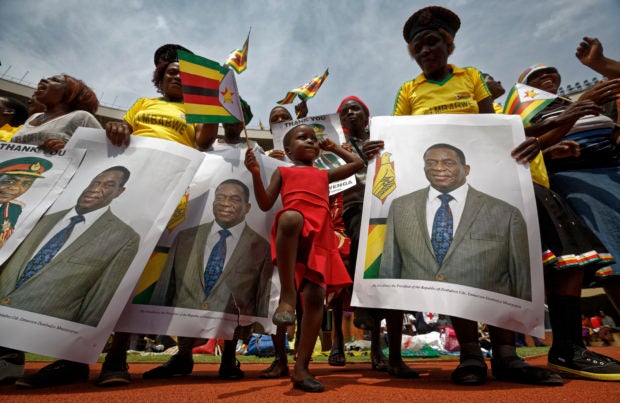 A young girl marches in position as she mimics the military parade, accompanied by supporters holding posters of President Emmerson Mnangagwa, at his inauguration ceremony in the capital Harare, Zimbabwe Friday, Nov. 24, 2017. Mnangagwa was sworn in as Zimbabwe’s president after Robert Mugabe resigned on Tuesday, ending his 37-year rule. (AP Photo/Ben Curtis)

HARARE, Zimbabwe — Some international leaders are urging Zimbabwe’s new president to deliver on his promises of inclusiveness, economic reform and free and fair elections.

Britain’s minister for Africa, Rory Stewart, says in a video message from Zimbabwe that “this was one of the wealthiest countries in Africa, has incredible human potential, very, very educated population … this is a country which has suffered terribly and which may be, if we’re patient and if we’re careful, be at a moment of change.”

The group of global leaders known as The Elders is urging Zimbabwe’s military, politicians and civil society to work together under new President Emmerson Mnangagwa, saying that “upcoming elections in 2018 are a crucial test of Zimbabwe’s new leaders’ commitment to democracy and political reform.”

The 75-year-old’s first speech as leader reached out to the nation at large, pledging “democratic” elections next year.

He also made friendly gestures toward the international community as he seeks to revive a collapsed economy after years of sanctions and corruption.

Former leader Robert Mugabe, who resigned after his firing of deputy Mnangagwa led the military to step in, will remain in the country. The 93-year-old had been the world’s oldest head of state and ruled for 37 years.