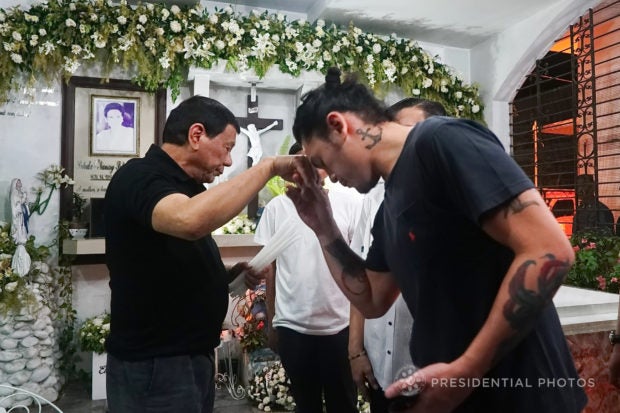 In this file photo, President Rodrigo Duterte extends his hand to his son Sebastian who showed a gesture of respect to his father during his visit to the resting place of his departed loved ones at the Roman Catholic Public Cemetery in Davao City on November 4, 2017. RENE LUMAWAG / PRESIDENTIAL PHOTO

A recent poll showed that eight out of 10 millennials not only approve of President Rodrigo Duterte’s handling of his job, but also expressed optimism that the best is yet to come for the country.

In Publicus Asia Inc.’s “Pahayag” online poll released on Friday, it showed that 82 percent of millennials, or those aged 18 to 36, approve of Duterte’s nearly two-year performance as president. His approval rating was highest in the Mindanao region with 94 percent.

The survey, conducted from Nov. 5 to 12 and used a non-probability sampling method on 1,200 respondents, was produced by the political management firm to establish a baseline for Filipino millennials on their brand of politics, economics, media habit, lifestyle choices and socio-political engagement.

Amid the criticisms hurled at the administration, the survey showed that a big majority of millennials still feel good about Duterte, said Publicus founder and CEO Malou Tiquia.

They also see Mr. Duterte as someone who “represents change” (72 percent), a nationalist (69 percent), and believe that his “policy of no-frills lifestyle for public officials should be praised,” (68 percent).

Tiquia noted that millennials are optimistic of the country’s future, with eight out of 10 millennials saying that the Philippines’ “best years are ahead of us.”

Millennials are also not that concerned with Duterte’s crude language and unrefined behavior.

Lilibet Amatong, Publicus’ co-founder, said that despite the millennials acceptance of the President’s behavior, this doesn’t necessarily follow that they share the same values as those espoused by Duterte.

She added that this can only mean that millennials “perceive this attitude as what we need in the leadership.”

In fact, Amatong said that 36 percent of millennials expressed concern that the human rights situation in the country is already a “very serious problem,” while another 38 percent said that it’s a “fairly serious problem.”

Duterte has repeatedly lambasted human-rights organizations and activists who criticized his administration’s war on drugs which led to the killings of thousands of suspected drug users and peddlers.

Most millennials described the extrajudicial killings in the country as either “critical” (43 percent) or “serious” (18 percent). It is interesting to note though that despite this figure, 72 percent of millennials are still satisfied with the government’s crackdown on the illegal drug trade.

And despite allegations of excesses in implementing the anti-drug campaign, the Philippine National Police (PNP) still enjoyed a “very favorable/mostly favorable” rating of 52 percent.

The PNP previously helmed the administration’s war on drugs before it was stripped of the responsibility due to mounting criticisms on drug-related killings, several of which involved teenagers.

Duterte, however, said on Wednesday that he would soon return the task from the Philippine Drug Enforcement Agency to the PNP.

Amatong said that the administration should take the findings in the poll as an instrument to guide them in setting the country’s policies.

She added that since the President’s approval ratings are buoyed by those from Mindanao, changes should already be felt in the region by the midterm for Duterte to retain the high ratings. /jpv

Duterte No. 1 most loving, caring and decisive leader – survey