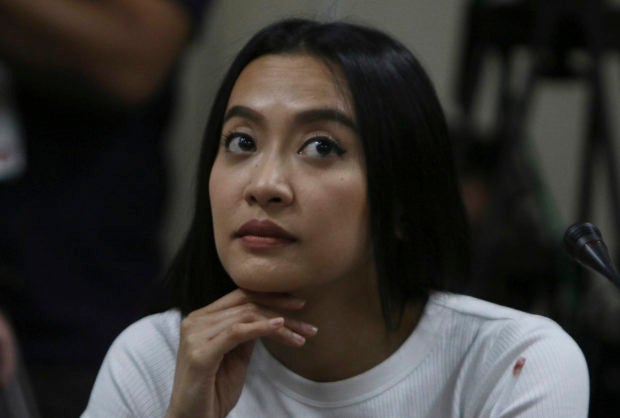 Assistant Communications Secretary Margaux “Mocha” Uson has announced that she would be studying at the Arellano University School of Law “to widen her knowledge of the law.”

“Starting January, I will be studying at the Arellano University School of Law to widen my knowledge of the law,” she tweeted in Filipino on Wednesday night, without elaborating.

She visited the university on Wednesday to inquire about the course, university personnel said. Classes in the law school start on Jan. 13 next year.

Uson, a political blogger who boasts of huge following on Twitter and Facebook and who has run into controversies over fake news, did not say if she intends to complete a law degree, or just enroll in certain law courses.

She was not on the list of passers of the Philippine Law School Admission Test either in April and September, a prerequisite for admission to basic law courses leading to a Bachelor of Laws degree.

Arellano University personnel, however, said that this is not a requirement for students enrolled in noncredit or seminar-type courses.

Her father, Oscar Uson, was a judge at the Pangasinan Regional Trial Court. He was assassinated in 2002.

Uson is a medical technology graduate of the University of Santo Tomas who later dabbled in acting, and founded the sexy all-female song-and-dance group Mocha Girls before she took to blogging.

When Davao City Mayor Rodrigo Duterte ran for President in 2016, she emerged as one of his staunchest supporters. In the past several months, she has stirred controversies for allegedly spreading fake news on social media.

Her notoriety has boosted her stock, with Speaker Pantaleon Alvarez recently announcing that he’s eyeing to include her in the administration’s senatorial lineup in the 2019 midterm elections.

Read Next
Abella goes to nonexistent DFA position
EDITORS' PICK
Geek out at TOYCON 2022 powered by Smart Signature
UK’s Boris Johnson will resign, BBC reports
High inflation: Your P1 is now worth only 87 centavos
High-risk pregnancy: Reducing your risk is in your hands
Unemployment rate up to 6% in May
House energy committee chair Arroyo bats for cheap electricity
MOST READ
Suspect in grisly killing of missing woman in Bulacan arrested
Kim Atienza’s daughter flaunts bikini body in response to critics of her ‘revealing photos’
Cop slain in Isabela ambush
FDA probes popular Filipino noodle brand for ‘high level of ethylene oxide’
Don't miss out on the latest news and information.