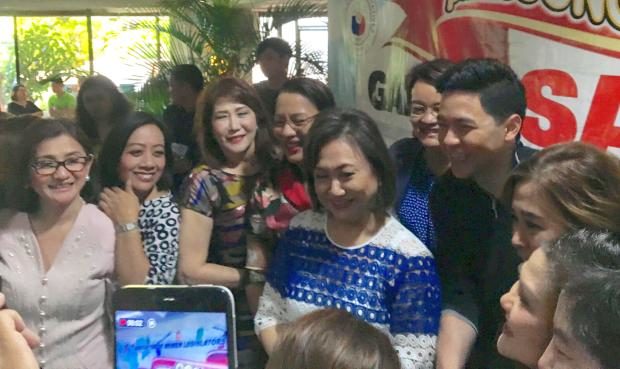 What else was happening in the House of Representatives besides the impeachment proceedings against Chief Justice Maria Lourdes Sereno?

The Association of Women Legislators Foundation, Inc., on Wednesday held an opening ceremony for the two-day “PamasCong Handog: Garage Sale for a Cause,” which aims at raising funds for the benefit of the families of troops who fell in the Marawi City conflict.

Arcillas-Nazareno was credited for bringing Richards, described as “the reason [the House employees] all went wild.”

The others who donated in kind were Reps. Estrellita Suansing, Jocelyn Limkaichong, Eric Martinez, Chiqui Roa-Puno, Lorna Silverio, and Lucy Torres-Gomez, as well as Villarica, Ermita-Buhain, Escudero, Chavez, and Aragones.

Herrera-Dy said Misamis Oriental Rep. Juliette Uy, who chaired the event, gave P300,000 for the benefit of the troops’ families.

During a half-hour opening ceremony, Alonte-Naguiat noted: “Despite our busy schedules, we have chosen to be a part of this.”

“We extend our sincere appreciation to our colleagues in Congress who so generously gave monetary contributions and some of their pre-owned and pre-loved [stuff]. Searching their closets, attics and basements for items to sell during our break is seriously no joke,” she said.

“They deserve all the glory and the help that we can give because their work is so hard,” Richards said, adding that he would play a soldier in Marawi City in this Saturday’s episode of GMA-7 drama anthology Magpakailanman.

Fernandez said: “It is a good cause. We would like to help…. It would be a great gift for the families.”

Richards became a household name in 2015 as partner of Maine Mendoza in the AlDub tandem, a comedic segment of noontime show Eat Bulaga! which used to be popular on social media and even hit a peak television rating of 50.8 percent.