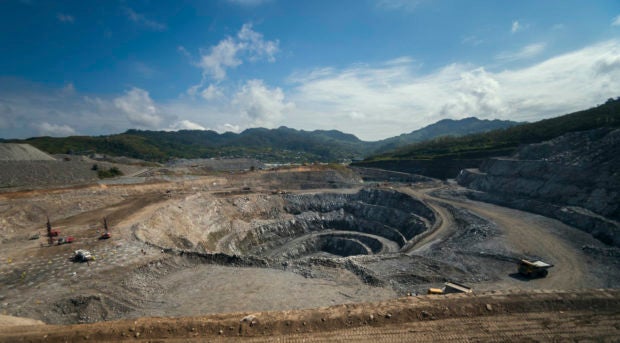 GIANT HOLE This massive open-pit mine is operated by OceanaGold, an Australian company extracting gold and copper, in Barangay Didipio in Kasibu, Nueva Ecija province. President Duterte has maintained the ban on this type of mining, according to his spokesperson Harry Roque. —RICHARD BALONGLONG

The ban on open-pit mining put in place by then Environment Secretary Regina Paz Lopez stays despite an interagency council’s recommendation to lift it, Malacañang said on Monday.

Presidential spokesperson Harry Roque said President Rodrigo Duterte had personally told him that the ban should remain in force even after the Cabinet-level Mining Industry Coordinating Council (MICC) had voted to reverse the policy.

“I verified this personally with the President. He says that the ban on new open pit mining remains,” Roque said at a press briefing.

He said this was one of the instances when he personally asked the President if there was a change in policy. “[H]e says that there is still no new policy on this. There is still a ban on new open pit mining.”

The MICC last month voted to reverse Lopez’s policy and her successor, Environment Secretary Roy Cimatu, said he expected the ban to be lifted before the end of the year.

Asked if the President had rejected the MICC recommendation, Roque said: “That’s the response I got.”

Before the Commission on Appointments rejected her, Lopez issued an administrative order banning open pit mining for copper, gold, silver and complex ores.

The Philippines is the world’s top nickel ore exporter.

Lopez said most of the country’s mining disasters were due to tailing spills from open pit mines.

But on Oct. 24, the MICC voted to lift the open-pit mining ban “provided that mining laws, rules and regulations are strictly enforced.”

In a statement, the Department of Finance (DOF) said that during the meeting, the MICC also recommended that the Mines and Geosciences Bureau “take a close look and take appropriate action” with regard to the expansion of 24 mining areas covered by mineral production sharing agreements (MPSAs).

Lopez in February shut down 23 mines and suspended five others, which the mining industry alleged did not undergo due process.

A week later, Lopez also ordered the cancellation of 75 MPSAs entered into by the government.

The MICC later undertook a review of the closure and suspension orders. The DOF said the MICC expected preliminary results “in January next year and the final report by March.”

Lopez said she was “very happy” with Mr. Duterte’s decision, expressing hope that her predecessor would heed the President’s stand.

However, Cimatu earlier said his policies would rely heavily on the recommendation of the MICC.

“That’s disgusting,” Lopez said of Cimatu’s pronouncement. “He should read the Philippine Constitution, go around the country, talk to those affected by mining, and visit the open-pit mines.”

She said the mining companies should fix one open-pit mine first before considering lifting the ban. “It’s been 100 years and no open-pit mine has been fixed.”

The Chamber of Mines of the Philippines (COMP), which represents about 26 mining firms in the country, said that while there was no change in policy yet, it was hopeful that an administrative order would be issued eventually.

“Secretary Roque is correct in saying that the open-pit mining ban is still in place. Since the MICC issued its recommendation on Oct. 25, the matter has not been acted upon,” COMP executive director Ronnie Recidoro said.

“We hope, however, that the situation will change and that the DENR (Department of Environment and Natural Resources) DAO 2017-10 (ban on open-pit method) will be reversed as recommended by the MICC,” he added.

“We respect the consistency and clarity of the position of President Duterte,” ATM spokesperson Jaybee Garganera said. “We demand that Secretary Cimatu listen and implement the clear instructions from President Duterte.”

Boy Macabasag, leader of the United Manicani Residents in Metro Manila who are affected by a mining operation, said his group had not talked to Cimatu despite a request for an audience.

Macabasag, along with other groups and Lopez, held a media briefing on Monday to oppose the open-pit method, among other mining issues.

Finance Undersecretary Bayani Agabin, who is an alternate for Dominguez on the MICC, acknowledged that the President had the final say on open pit mining.

Lifting the ban could open the door for some big-ticket ventures, including the $5.9-billion Tampakan copper and gold mine.

The Tampakan project in South Cotabato province in Mindanao is the country’s biggest stalled mining venture.

Operator Glencore Plc decided to quit the project in 2015 but development was first halted after South Cotabato banned open-pit mining in 2010.

Lopez had said the project would cover an area the size of 700 soccer fields in what otherwise would be agricultural land.

Mr. Duterte said in September that he agreed with the open-pit mining ban given the environmental damage it caused, but would give mining firms time to find other ways to extract minerals. —With reports from Jaymee T. Gamil and the wires