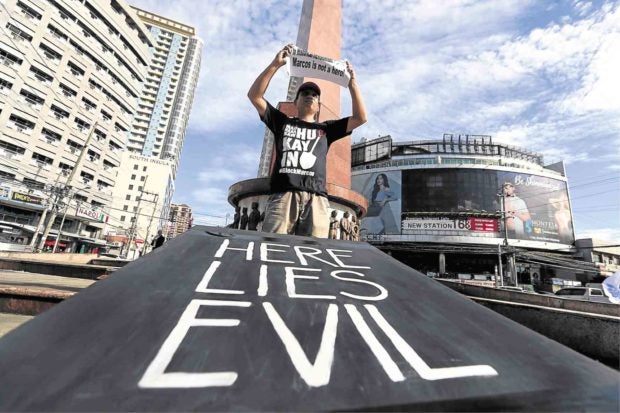 NO HERO A protester holds a sign behind a fake coffin painted with a message “Here Lies Evil” at the Boy Scout Circle in Timog Avenue, Quezon City, on Saturday. —LYN RILLON

Groups opposed to the return to power of the family of the late dictator Ferdinand Marcos and critics of President Rodrigo Duterte on Saturday called on Filipinos to remain vigilant against another strongman rule and moves to erase the dictatorship’s record of plunder and human rights violations.

The call was issued on the first anniversary of the sneaky burial of Marcos’ remains at Libingan ng mga Bayani in Fort Bonifacio, Taguig City. His family hurriedly buried his remains days after it was allowed by the Supreme Court, closed the cemetery to the public and blocked protesters at the gates.

The burial — an election campaign promise by President Duterte — was met with protests from victims of the Marcos regime and those opposed to the Marcoses’ return to power.

A small group of youths belonging to the BlockMarcos group on Saturday picketed at the gates of Libingan, carrying picks and shovels to dramatize their demand to exhume Marcos.

“We mark this day with a symbolic action to renew our call to unearth the dictator and all the remnants of tyranny that continue to haunt us until today,” the group said in a statement.

“We relive the indignation we felt at the Marcoses’ callous desecration of our history and the memory of those who died fighting Marcos’ martial law. We remember their shameless disregard for justice, lest we lose sight of our duty to confront the threat of a complete regress into dictatorship that we are now facing,” the group said.

Campaign Against the Return of the Marcoses to Malacañang (Carmma) urged heightened vigilance in the face of the “continuing rehabilitation of the Marcoses sponsored by the Duterte administration.”

“Marcos is entombed in [Libingan], his family are in government positions, their  ill-gotten wealth securely in their keeping. The dictator’s face is glorified on stamps, while justice continues to elude the victims of the Marcos dictatorship. And all this has happened courtesy of the Marcos copycat Duterte,” said Carmma spokesperson Bonifacio Ilagan.

Marcos was toppled by the People Power Revolution in 1986. He had denied any wrongdoing during his 20-year rule till his death in exile in Hawaii in 1989.

“The people’s verdict against the dictator and tyrant has been trampled upon and reversed by the Marcoses and their cohorts in power. But we shall push on with the struggle for justice and uphold history as it happened. We shall not be cowed,” Ilagan said.

Also on Saturday, the opposition bloc in the Senate paid tribute to Filipinos who protested against the Marcos burial.

“Amidst this dark attempt at historical revisionism came the light of thousands of indignant Filipinos who remember their history and cry out: he is not a hero,” the senators said in a statement.

“On this day, let us choose to remember not the burial but the people who rose to the call: protesters who showed a strong sense of hope, pride and solidarity. Never forget. Never again,” they said.

To many Filipinos, the late dictator is not a hero even if

he was buried at the heroes’ cemetery, according to Bishop Ruperto Santos of Balanga, Bataan.

“The [burial] place does not make [one] a hero,” Santos said. “We know very much in our hearts and from our experiences who are our real and right, true and trustworthy heroes.”

Santos urged Filipinos to seek justice and demand reparations for the victims of Marcos’ martial law regime, the prosecution of the rights abusers and the return of his ill-gotten wealth.

Manila Auxiliary Bishop Broderick Pabillo said the “moral side” of the burial could still be debated even after the Supreme Court ruled that Marcos could legally be buried at Libingan.

“Not because an issue is legal, it is moral,” he said. —WITH REPORTS FROM JULIE M. AURELIO AND LEILA B. SALAVERRIA