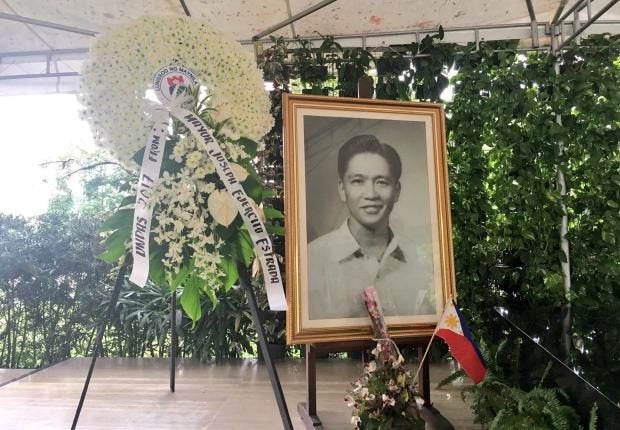 A year after the burial of former President Ferdinand Marcos Sr. at the Libingan ng mga Bayani, minority senators rallied the public to “never forget” and “make their voices be heard.”

“But while a false hero was being buried at the Heroes’ Cemetery, true heroes were rising to the challenge and making their voices heard. All across the country, we saw the power of a people who never forgot the truth about this dictator.”

“Crowds numbering in the thousands gathered to condemn the disrespect and utter shamelessness of the secret funeral,” they said. “Amidst this dark attempt at historical revisionism came the light of thousands of indignant Filipinos who remember their history and cry out: he is not a hero.”

The minority senators also urged people to remember not just the burial but the people who rose to the call and opposed the burial of Marcos at the Libingan ng mga Bayani.

“Much of our news today tells us how far we still have to go, how so much is still to be done,” the said. “So on this day, let us choose to remember not the burial but the people who rose to the call: protesters who showed a strong sense of hope, pride, and solidarity.”

On Nov. 18, 2016, the former dictator was “unexpectedly” buried at the Libingan ng mga Bayani 27 years after his death in 1989 due to lung, kidney and complications.

He was previously interred in a mausoleum in Batac, Ilocos Norte.

Read Next
De Lima sees ‘dirty tactics’ to pin her in drug case
EDITORS' PICK
DepEd seeks P16B addt’l funds for repair of schools damaged by Abra earthquake, typhoons
12.2M Filipino families felt ‘poor’ in Q2 of 2022 — SWS survey
Summit breakthrough – EJ Obiena is the first Filipino to win in the World Athletics Championship
As Duterte stepped down, more Filipinos tighten belts to make ends meet
House energy committee chair Arroyo bats for cheap electricity
Beyond just beauty and aspiration: How Air Residences gives new meaning to luxury
MOST READ
LOOK: Barbie Imperial a gold goddess in ‘Ibong Adarna’ birthday shoot
US jet that flew Pelosi to Malaysia turns north to Philippines
Giselle Sanchez slammed by Floy Quintos: ‘Art has nothing to do with your choice’
Vice Ganda apologizes for ‘Miss Q and A’ contestant who made inappropriate joke on ‘It’s Showtime’
Don't miss out on the latest news and information.