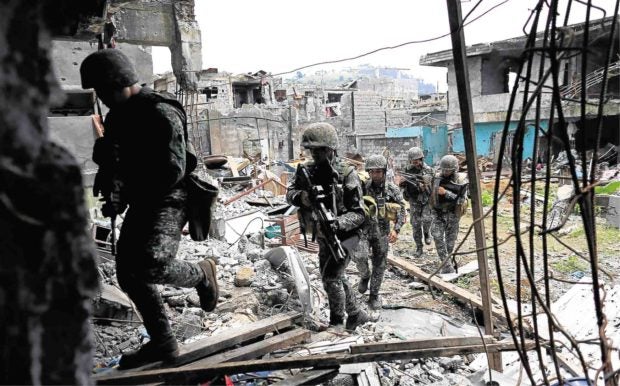 Marines patrol the main battle zone of the ruined Marawi City amid reports that soldiers and terrorists committed rights violations, some amounting to war crimes, during the five-month siege. .—JEOFFREY MAITEM

The military on Friday said it was committed to uphold international humanitarian law and respect for human rights and would investigate allegations that troops tortured and mistreated civilians during the five-month siege of Marawi City.

Armed Forces of the Philippines spokesperson Maj. Gen. Restituto Padilla was reacting to an Amnesty International report that documented violations of humanitarian law, some amounting to war crimes, during the fighting between Philippine government troops and pro-Islamic State (IS) militants.

The human rights group said the militants committed unlawful killings, hostage-taking, pillage and mistreatment of captives. They allegedly used child soldiers and murdered civilians, which is a war crime, with some of their targets said to have been singled out because they were Christians.

Government forces, on the other hand, allegedly tortured and mistreated detainees and looted, Amnesty said in its report.

“We will investigate and discipline those found guilty of violating policies and regulations, which includes IHL (international humanitarian law) and HR (human rights),” Padilla told reporters in Malacañang.

Padilla said the military would respond more fully to the Amnesty report after going through it.

He said AFP chief of staff Gen. Rey Leonardo Guerrero had reminded the troops to respect people’s rights and warned that the military “will not tolerate nor condone misdeeds of our soldiers to include violations of [international humanitarian law] and human rights.”

Guerrero, who was head of the Eastern Mindanao Command, which does not cover Marawi, took over as chief of staff from Gen. Eduardo Año after the government declared victory over the pro-IS fighters last month.

The siege of Marawi raged from May 23 until the government declared it over on Oct. 23.

More than 1,100 combatants and civilians were killed, including more than 900 Filipino and foreign militants. About half a million people were displaced by the prolonged and widespread fighting that reduced much of the Islamic city to rubble. 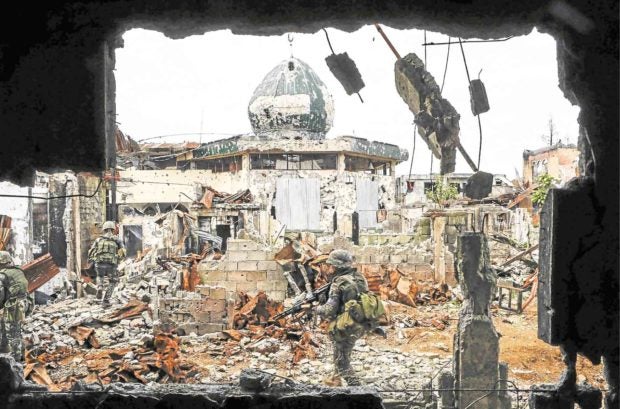 CLEARING OPERATIONSMembers of the Philippine Marines 1st Brigade scour an area around a gutted mosque during the final push to dislodge terrorist fighters from the main battle zone in Marawi City.—JEOFFREY MAITEM

Amnesty said it interviewed 48 survivors and witnesses, and many described how the militants regularly targeted and killed civilians.

Multiple witnesses described 10 incidents in which militants killed at least 25 civilians by shooting them or slitting their throats. Most were targeted because they were Christians, and some were killed as they attempted to flee, it said.

The report cited instances in which members of the Philippine military treated civilians who escaped militant-controlled areas with suspicion, detaining them and subjecting them to torture or ill-treatment.

Amnesty said it interviewed eight victims of alleged abuse by the troops, including seven Christian construction workers who had been trapped in Marawi because they feared being captured or killed by militants if they tried to escape.

The report quoted one of the workers as saying that after he and his companions crossed a bridge to flee a militant-controlled area, Philippine Marines detained and beat them up, insisting they were militants. He said he was punched and kicked, beaten with a rifle, and their hands and feet were tied with electrical wire.

Amnesty urged the government to investigate and ensure reparations for victims. It also called for quick rebuilding efforts, the safe return of residents, the restoration of habeas corpus and consideration of lifting martial law still in force in Mindanao.

“Government forces may also have carried out disproportionate air and ground attacks,” the report said, adding that the civilian death toll from bombings and militant killings was “likely significantly higher than the official count.”

Padilla, however, said the military had considered the welfare of the hostages and other civilians in the battle zone in its operations. As a result 1,780 civilians were rescued, he said.

“The proportionality by which we used force was in consideration of all the challenges that we faced, which [were], one—the safety of civilians who may be trapped in the area,” he said. “That’s primordial.”

“The rescue of the civilians who were held hostage, [that’s the] second,” Padilla said. “Only third is the safety of our own troops who were in the main battle area addressing these armed groups.”   —WITH REPORTS FROM AFP AND AP