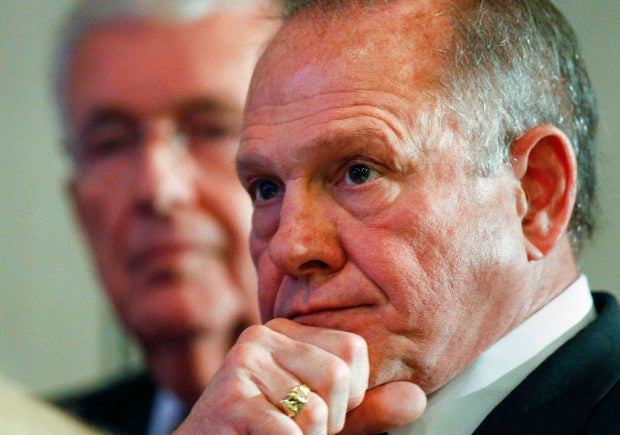 BIRMINGHAM, Alabama — Ever defiant, Republican Roy Moore’s campaign lashed out at the women accusing him of sexual misconduct, declaring “let the battle begin.” Women’s advocates decried the talk as worn intimidation tactics in a desperate attempt to keep his imperiled Senate bid alive.

Moore ignored mounting calls from Washington Republicans concerned that he may not only lose a seat they were sure to win but also may do significant damage to the party’s brand among women nationwide as they prepared for a difficult midterm election season.

President Donald Trump, through a spokeswoman, called the allegations of sexual misconduct against the former judge “very troubling.” The Republican president stopped short of calling on Moore to quit the race, however, breaking with most Republican leaders in Washington, including McConnell, the Senate majority leader.

“He thinks that the people of Alabama should make the decision on who their next senator should be,” White House press secretary Sarah Huckabee Sanders said, declining to clarify whether Trump continued to back Moore.

Trump did take time to publicly ridicule Democratic Sen. Al Franken, who apologized Thursday after a woman who had traveled with him on a USO tour in 2006 accused him of forcibly kissing her and then groping her for a photograph taken while she was sleeping on a transport plane. Trump tweeted that the photo was “really bad” and that “just last week he was lecturing anyone who would listen about sexual harassment and respect for women.”

In Alabama, Moore appeared alongside more than a dozen religious leaders, who took turns bashing the Christian conservative’s many critics — especially his female accusers.

“This is a man who does not lie. Compare that to his accusers,” charged Gordon Klingenschmitt of the group Pray in Jesus’ Name.

With Moore looking on, Klingenschmitt quoted the Ten Commandments in a message aimed at two women he called out by name — one has said she was 14 and the other that she was 16 when Moore initiated sexual contact as a district attorney in his 30s.

Another Moore supporter, professor Joel Brind of Baruch College, singled out Gloria Allred, the attorney for one of the accusers, for supporting an agenda designed to “enable serial child predators” — a reference, Brind said, to Allred’s support for abortion rights.

Moore called the allegations “unsubstantiated,” ”unproven” and “fake.” ”They’re not only untrue, but they have no evidence to support them,” he insisted, refusing to answer any questions from reporters about the allegations.

Moore has given a single media interview about the allegations to Fox News Channel host Sean Hannity. His campaign website has added a form asking people to report “inappropriate news organization contact.”

Still, he has repeatedly hinted that his team has gathered evidence against his critics. He cited evidence of “collusion” soon after the initial report surfaced last week.

His wife circulated a fake report earlier in the week that reporters were offering to pay thousands of dollars for women to come forward with new claims against Moore. In a subsequent social media post, she described the media’s actions as “an all-out assault, which is why we are suing them.”

Moore’s attorney has demanded that one of the accusers, Beverly Young Nelson, release a yearbook she contends Moore signed so it can be analyzed by a handwriting expert to prove its authenticity. Nelson says that Moore aggressively groped her in a locked car when she was 16.

The Moore campaign dug up Nelson’s divorce papers, which had been signed by Moore, and held them up to cameras suggesting she had copied the signature.

Gloria Allred, Nelson’s attorney, said she and her client were prepared for Moore’s “slash and burn” approach.

“If in fact his attempt is to intimidate her or me, he has failed miserably,” she said. “We prepared. We knew that this would be a battle for the truth, that this is someone who most likely will fight to the end.”

At least three new allegations of misconduct surfaced on Wednesday, including one by Tina Johnson, who told AL.com that Moore groped her during a 1991 meeting in his law office. Two others told The Washington Post they were young women when Moore courted them as a district attorney in his 30s. Three other women told the newspaper last week that they were teens when Moore tried to initiate romantic relationships. One said she was 14 when Moore touched her over her bra and underwear.

The Alabama Republican Party reiterated its support for Moore on Thursday, a day after its 21-member steering committee privately contemplated the situation.

The state GOP has the power to revoke Moore’s GOP nomination and ask election officials to ignore ballots cast for him, although the state party has little interest in alienating Moore’s followers a year before statewide elections.

Meanwhile, the National Organization For Women condemned the attacks against Moore’s accusers, suggesting that the tactics help explain why many victims of sexual harassment are afraid to go public.