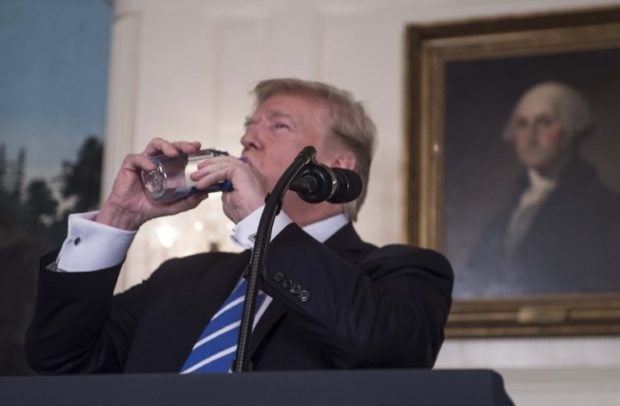 US President Donald Trump drinks water from a bottle as he delivers remarks on November 15, 2017 in the Diplomatic Room at the White House in Washington, DC.
At right is a portrait of first US president George Washington. / AFP PHOTO / NICHOLAS KAMM

WASHINGTON  — President Donald Trump is displaying selective outrage over allegations of sexual harassment against prominent men in politics, as his own tortured past lingers over his response.

Trump has repeatedly declined to follow Senate Majority Leader Mitch McConnell and House Speaker Paul Ryan in calling on Moore to quit the race. Both had said they believe Moore’s accusers.

With the nation confronting revelations of sexual impropriety by powerful men in entertainment and politics, Trump is an inconsistent as well as an unlikely critic of alleged offenders.

More than a dozen allegations of sexual harassment and misconduct were leveled against him in the waning days of the 2016 presidential campaign. Trump was caught on tape in conversation with “Access Hollywood” boasting in graphic detail of sexually harassing women.

That didn’t deter Trump from scoring a blow on a reeling detractor.

Leeann Tweeden, now a Los Angeles radio host, on Thursday accused Franken of forcibly kissing and groping her during a 2006 USO tour. She released a photo showing the comedian turned senator posing in a joking manner with his hands on her chest as she naps wearing a flak vest aboard a military plane.

In a pair of tweets Thursday night, Trump spotlighted the accusations against Franken, saying the photo “speaks a thousand words.”

“Where do his hands go in pictures 2, 3, 4, 5 & 6 while she sleeps?” Trump tweeted. “And to think that just last week he was lecturing anyone who would listen about sexual harassment and respect for women.”

Hours before the tweets appeared, Franken moved swiftly to apologize and embrace bipartisan calls for an ethics investigation into his actions.

As Trump assailed Franken, Moore was digging in, pledging to fight the accusations against him as the state GOP in Alabama reaffirmed its support for the embattled candidate. Two women have come forward by name accusing Moore of initiating sexual contact with them when they were 14 and 16, respectively.

In recent days, GOP officials sought to explain away Trump’s refusal to call on Moore to step aside as an effort not to add more fuel to the anti-establishment fires boosting Moore’s campaign. They also suggested that Trump was wary of wading into issues of sexual impropriety given the previous claims against him. But the strike against Franken indicated a more political rationale. The former “Saturday Night Live” writer and cast member has been an outspoken critic of Trump’s administration.

White House press secretary Sarah Huckabee Sanders repeatedly declined Thursday to say whether Trump believed Moore’s accusers, even after the president’s daughter, Ivanka Trump, told The Associated Press that she had no reason to doubt their claims against him.

“He thinks that the people of Alabama should make the decision on who their next senator should be,” Sanders said of the president, who dodged questions from reporters on the subject twice earlier in the week. Sanders also refused to say whether Trump was pulling his endorsement of the candidate.