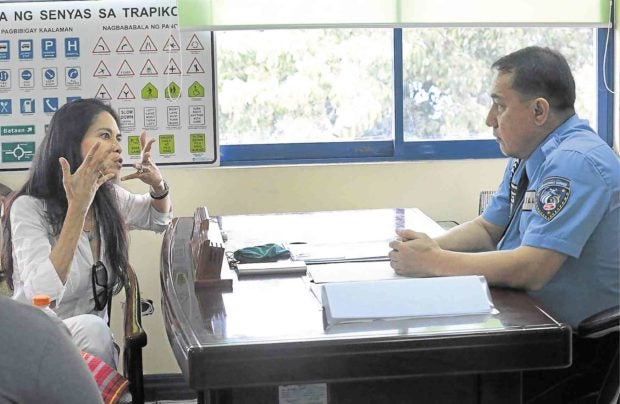 Actress Maria Isabel Lopez does some explaining before Director Francis Almora of the Law Enforcement Service of the Land Transportation Office on Thursday. —GRIG C. MONTEGRANDE

Apologetic but still hoping for leniency, actress Maria Isabel Lopez went to the Land Transportation Office in Quezon City on Thursday morning to answer a complaint over her use of the Asean VIP lane on Edsa, an act she even video-recorded and bragged about on social media.

Accompanied by two lawyers, Lopez appeared before LTO law enforcement service director Francis Ray Almora. She was told to submit a position paper within the day.

Speaking to reporters later, Lopez said she hoped the LTO would be lenient on her since she had never violated any traffic regulation before.

“My posting on social media, it’s just like the child in me,” said Lopez, a veteran actress who won the 1982 Binibining Pilipinas crown. “It’s good that we have due process, but I did those actions and I’m willing to take the consequences of my action. I just wish they will weigh the entire incident and I just told the director that I’ve never had any driving or traffic violation before.”

“So I should be given a little senior citizens discount, 20 percent,” Lopez, 55, added in jest.

She also pointed out that she was not the only one who entered the lane and therefore should not be “singled out.”

But after saying that she hoped for some leniency, she maintained that being an artist should not entitle her to special treatment and that she remained aware that no one is above the law.

In recent Facebook and Instagram posts, Lopez recounted how she removed traffic cones on Edsa so her car could use lanes reserved for delegates to the 31st Asean summit being held in the country.

The post drew flak from netizens and prompted the Metropolitan Manila Development Authority to demand that she be penalized.

Lopez was later summoned by the LTO for disregarding traffic signs, breaching security protocols and violating the Anti-Distracted Driving Act.

Almora said the LTO will come out with a ruling on Lopez’s case within five days.