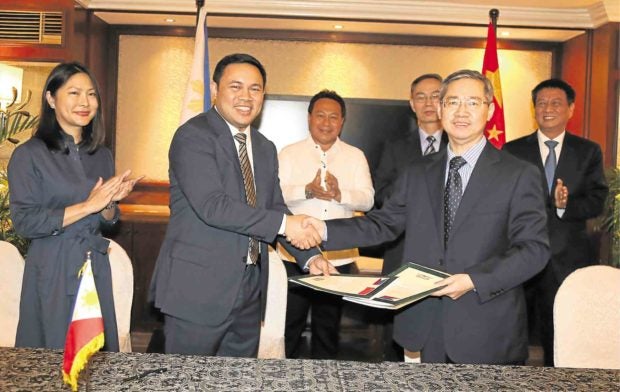 Public Works Secretary Mark Villar (left) and Deputy Director General Zeng Hua of the Chinese Ministry of Commerce seal the agreement on the bridge projects on Nov. 15 in Malacañang. —PHOTO COURTESY OF DPWH

The construction in Metro Manila of two state-of-the-art bridges financed by China is set to begin next year, according to the Department of Public Works and Highways (DPWH).

Philippine and Chinese government leaders have signed the implementation agreement for the Binondo-Intramuros and the Estrella-Pantaleon bridge projects, following the ceremonial launch in Malacañang led by President Duterte and visiting Chinese Premier H.E. Li Keqiang.

The construction of the bridges is expected to be completed in 2021, Villar said in a statement on Thursday.

The Estrella-Pantaleon Bridge, on the other hand, is a P1.367 billion four-lane bridge which would replace the old two-lane bridge in the area.

“The project will increase the road network capacity connecting Rockwell Center, Makati, and Barangka Drive, Mandaluyong and will reduce traffic that occurs at the six-lane approach road at Estrella Street in Makati and the intersection at the Barangka side in Mandaluyong,” Villar said. —TINA G. SANTOS