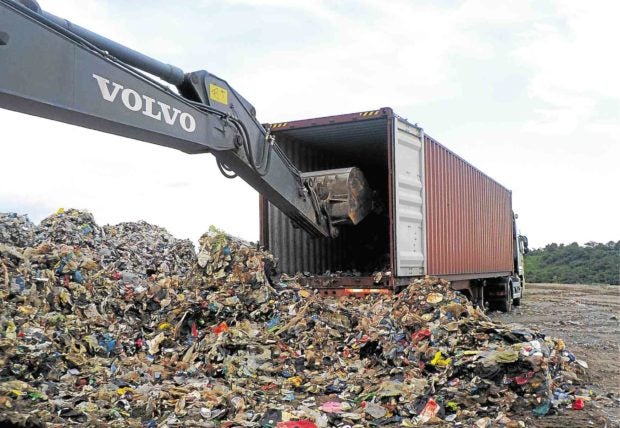 CLARK FREEPORT — The government has no problem shipping back to Canada a set of container vans that contained illegally imported garbage in 2013, for as long as it knows who would foot the bill.

Environment Undersecretary Juan Miguel Cuna said the Department of Environment and Natural Resources (DENR) was waiting for a Manila court to act on a motion for compliance filed by the Department of Justice, after it ordered importing firm, Chronic Plastics, to ship back the garbage.

“There’s no problem on who would ship the waste back to Canada. The more important matter to resolve now is who would pay for the cost of shipping,” Cuna said.

Canadian Prime Minister Justin Trudeau, who was hounded by the controversy in 2015 when he visited the country for the Asia-Pacific Economic Cooperation Summit, was again asked on Tuesday about the trash shipment during a press briefing on the 31st Association of Southeast Asian Nations Summit.

Trudeau said unspecified “legal impediments” had been resolved so nothing barred the return to his country of the shipments of garbage.

Cuna said he was assuming that the remaining 80 containers were still with the Bureau of Customs (BOC).

The BOC dumped the contents of 26 containers in July 2015 at a landfill in Capas town, Tarlac province, that is operated by Metro Clark Waste Management Corp. (MCWMC).

Rufo Colayco, MCWMC president, on Tuesday said neither the Canadian government nor the private importer, Chronic Plastics, had made any effort to retrieve the garbage from the Kalangitan landfill.

A contract with the BOC required MCWMC to take 55 of the 106 containers carrying garbage that became the subject of controversy.

“It was a private sector transaction between Filipinos in Canada and in the Philippines. The cargo was declared as ‘recycled plastics.’ Based on the two dozen odd containers that we unloaded, it was largely plastics though poorly sorted so that there was a lot of household trash mixed [with the cargo],” Colayco said.

“It is illegal to ship garbage internationally. But recycled plastics are legally allowed to be shipped internationally. If anyone should be held liable, it’s the Filipino businessman who shipped it to himself from Canada,” he said.

“Of that, we had unloaded about half before we stopped upon the objection of the Tarlac provincial board,” Colayco added.

No action from gov’t

He said the Canadian government “should not be obligated to take back the garbage at its expense.”

“How come our government hasn’t taken action?” he asked.

In Zambales province, eight other vans containing Canadian trash have been sealed tight as part of a toxic control protocol at the Subic Bay Freeport, said Wilma Eisma, chair and administrator of the Subic Bay Metropolitan Authority (SBMA).

The BOC consigned 23 vans to the Port of Subic to help decongest the Manila port in August 2014 but 15 of these were pulled out and taken to Pampanga and Tarlac provinces for disposal, she said.

The SBMA seaport department, the BOC and the Subic Bay International Terminal Corp. were responsible for the disposal of the remaining containers, said Jerome Martinez, general manager of the SBMA seaport.