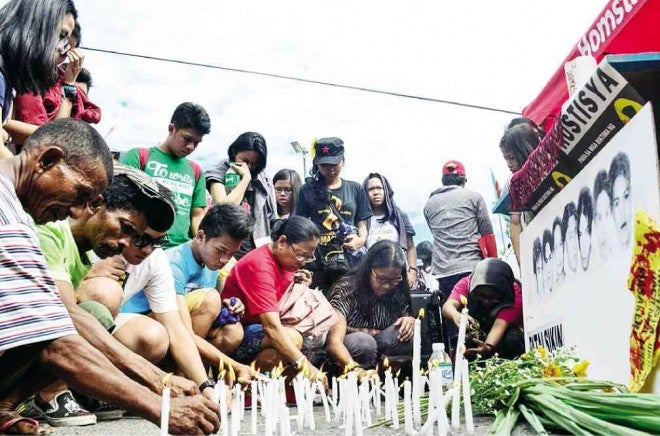 TARLAC CITY – The Tarlac police detained an activist on Wednesday after militant farmers stormed a contested property inside the former sugar estate on the eve of the so-called Hacienda Luisita massacre in 2004.

Supt. Bayani Razalan, Tarlac City police chief, said Sibayan and other Ambala members were facing charges of malicious mischief and physical injuries for destroying the concrete fence of the Rizal Commercial Banking Corp. compound in the Tarlac City side of Luisita.

On April 24, the same group forcibly occupied the RCBC compound, after they petitioned then Agrarian Reform Secretary Rafael Mariano to use the 500-hectare property for agrarian land distribution.

The RCBC lot is what remains of the Luisita estate most of which have been distributed to farmers by the Department of Agrarian Reform.

On Wednesday, around 500 Ambala members staged the rally at 9 a.m. in front of the RCBC lot before they broke through the fence an hour later.

Following Sibayan’s detention, 200 Ambala members held a protest rally at Camp Macabulos. Some of them spray-painted the police compound.

Reached by telephone, Sibayan said a police officer in plainclothes dragged her into a police vehicle parked inside the RCBC lot. “They said they would kill me,” Sibayan said in Filipino.

The group was scheduled to hold on Thursday a memorial of the massacre where seven farmers were killed during a clash between policemen and strikers.

Cases filed against government officials, including Aquino when he was Tarlac representative, in connection with the killings had been dismissed.