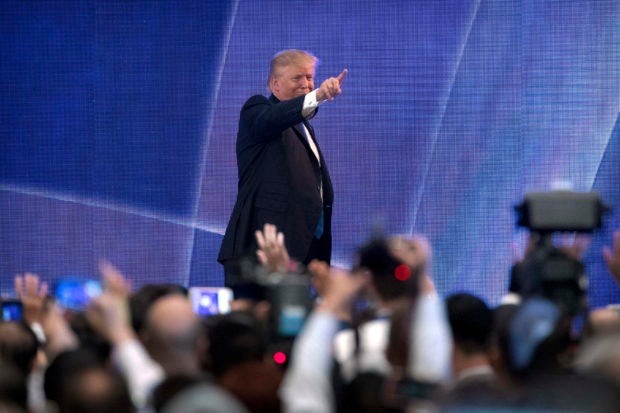 Trump has given little indication of whether he’s interested in playing the role of party heavy. Press secretary Sarah Huckabee Sanders has echoed other Republican leaders, saying last Friday that Moore should step aside if the allegations are true. But as other Republicans began to call for Moore to quit the race, Trump was notably silent in public. On Tuesday, he didn’t address the issue when he spoke with reporters aboard Air Force One as he flew back to Washington, nor did he respond to shouted questions about Moore as he entered the White House that night.

For Trump and Republicans, there are no good options. If Moore wins, they can either spend an already harrowing midterm election cycle defending their new colleague, or overturn the will of Alabama voters by casting him out of the Senate. If Moore loses and the seat flips to Democratic control, the party loses a critical vote in its razor-thin Senate majority, with issues like tax reform and immigration set to be considered in the coming months.

“I have to get back into the country to see what’s happening,” Trump told reporters over the weekend as he flew from Danang, Vietnam to Hanoi during his five-nation tour of Asia.

But behind the scenes, he was vexed by the issue. In an interview with the Wall Street Journal on Tuesday, Senate Majority Leader Mitch McConnell said Trump had been involved in dealing with the Moore situation “in great detail” during the trip. McConnell said he and Trump discussed the question on Friday, with chief of staff John Kelly and Vice President Mike Pence weighing in on subsequent days.

Trump’s 12-day trip, the longest of his presidency, was quickly overshadowed at home by the shocking accusations of sexual assault on minors by Moore, who was embraced publicly by the White House last month after winning the state’s GOP primary.

The shocking revelations dominated cable news for days, as Moore denied the allegations and pledged to stay in the race.

Even Chinese President Xi Jinping was drawn in. “Who is Roy Moore?” Xi asked Trump privately after they delivered joint statements to reporters, in a moment described by two White House officials not authorized to speak publicly about private conversations.

GOP officials cautioned that the actions of Washington Republicans, including the president, were unlikely to affect Moore’s decision-making — and that any moves against him could backfire in an anti-establishment political environment.

The president backed Moore’s unsuccessful rival, Sen. Luther Strange, in the Republican primary. Moore has the backing of Trump’s former chief strategist, Steve Bannon. And Bannon’s conservative news site, Breitbart, has led the charge in trying to discredit the allegations against Moore, as it tries to boost the nationalistic candidate.

One person familiar with the president’s thinking said Trump has been slow to call for Moore to exit the race in part because he risked embarrassment if, as expected, Moore defied him.

On Tuesday, the Republican National Committee halted its efforts on Moore’s behalf, following similar action by the National Republican Senatorial Committee on Friday. Three Republicans familiar with the RNC’s decision, but not authorized to discuss it publicly, said Trump signed off on the move to cut Moore loose.

Moore was already a pariah among national Republicans even before the recent allegations of inappropriate contact with minors. A twice-removed state judge, Moore’s anti-gay and anti-Muslim rhetoric have long repelled the GOP mainstream.

McConnell has openly floated the possibility of having Attorney General Jeff Sessions, whose move from the Senate to the Cabinet necessitated the special election, run for his old seat as a write-in candidate.

A source close to Sessions says he has told friends he is not interested in returning to the Senate.

Read Next
Ex-PNR execs charged over railroad ties made of wrong wood
EDITORS' PICK
Legarda emphasizes role of ICC/IPs in nation building this IP month
Work-From-Home is here to stay and requires reliable logistics
Climate Change Commission and Nestlé PH to discover sustainability-focused solutions
TNT nears PBA crown after rout of Magnolia in Game 4
PH still at bottom of COVID-19 economic resilience ranking
Renewal of driver’s license now requires taking LTO education seminar
MOST READ
Drivers now required to take driver’s education upon license renewal – LTO
Marcos Jr’s ‘special diploma’ from Oxford: You can have it, too
Don’t do that: Robredo to supporters calling to boycott restos supportive of Marcos
OVP spox to Imee Marcos: Robredo is an extraordinary lawyer
Don't miss out on the latest news and information.