High blood pressure redefined as 130, not 140 — US guidelines 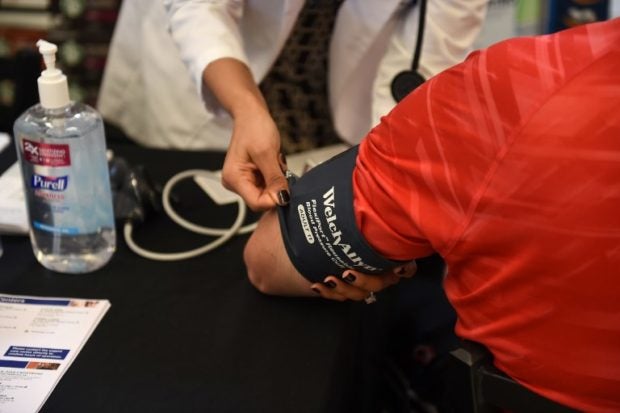 A medical assistant (left) takes the blood pressure of a patient in his November 28, 2016, file photo taken in Irvine, California. AFP FILE

LOS ANGELES, United States — High blood pressure was redefined Monday by the American Heart Association, which said the disease should be treated sooner, when it reaches 130/80, not the previous limit of 140/90.

Doctors now recognize that complications “can occur at those lower numbers,” said the first update to comprehensive US guidelines on blood pressure detection and treatment since 2003.

The new standard means that nearly half (46 percent) of the US population will be defined as having high blood pressure.

Previously, one in three (32 percent) had the condition, which is the second leading cause of heart disease and stroke, after cigarette smoking.

The normal limit for blood pressure is considered 120/80.

Once a person reaches 130/80, “you’ve already doubled your risk of cardiovascular complications compared to those with a normal level of blood pressure,” said Paul Whelton, lead author of the guidelines published in the American Heart Association journal, Hypertension and the Journal of the American College of Cardiology.

“We want to be straight with people –- if you already have a doubling of risk, you need to know about it.”

He said a diagnosis of the new high blood pressure does not necessarily mean a person needs to take medication, but that “it’s a yellow light that you need to be lowering your blood pressure, mainly with non-drug approaches.”

The changes were announced at the American Heart Association’s 2017 Scientific Sessions conference in Anaheim, California. /cbb