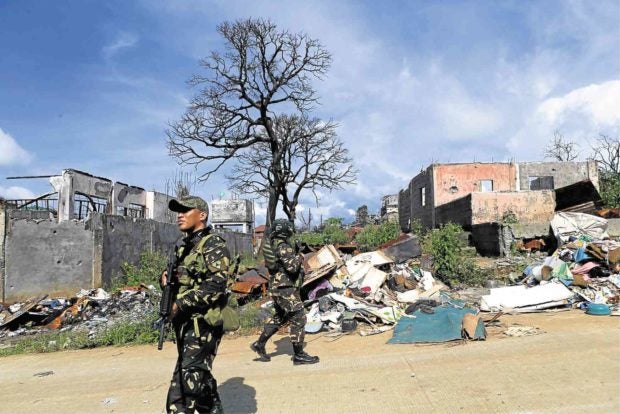 Government soldiers patrol an area in Marawi City as they look for the remaining Islamic State-inspired militants who attacked the Lanao del Sur provincial capital.—JEOFFREY MAITEM

Col. Romeo Brawner Jr., deputy commander of the military’s Joint Task Group Ranao, on Monday said soldiers were conducting clearing and search operations near the Bandaringin Mosque on Sunday when one of them saw a gun in a shallow portion of the lake.

“One of the members of the search teams saw one weapon as visible from the surface and [got into the water] to get it,” Brawner said.

“[We] believed that the terrorists, during the last hours of the firefight when they sensed defeat and when they were about to make their final escape, threw their weapons into the lake,” Brawner said.

“It is assumed that more firearms are still under the lake. Search operations will continue,” he added.

On Saturday, soldiers conducting mopping up and clearing operations were able to reach the basements of the last two buildings held by Islamic State (IS)-inspired militants near Lake Lanao pier here. These buildings served as the last strongholds of the Maute and Abu Sayyaf groups that laid siege to this city on May 23.

The government stopped all combat operations in Marawi City on Oct. 23, a week after President Duterte declared that the city had been freed from the influence of terrorists.

Brawner said the stench of decaying flesh greeted soldiers as they explored the basements.

“These buildings were where they made their last stand,” Brawner said.

During his arrest on Nov. 1, Indonesian fighter Muhammad Ilham Syahputra said that up to 39 militants remained near the lake after he shot and killed two of his companions who were preventing him from leaving.

Four days after Syahputra’s arrest by members of the Barangay Peacekeeping Action Team of Barangay Loksadatu, soldiers clashed with a group of militants, killing nine gunmen.

It was the most recent encounter of soldiers with terrorists as they searched every building in the city to ensure that no more IS gunman remained here.

Brawner said soldiers were cautious as they searched several buildings—including the last strongholds of the gunmen—but found no sign of life.

“So far [there was] no sign of life or movement in the other structures, but the troops wanted to make sure that no more terrorists [were left in these areas],” he added.

What the soldiers found, he said, were improvised explosive devices, guns and bullets. —Richel Umel