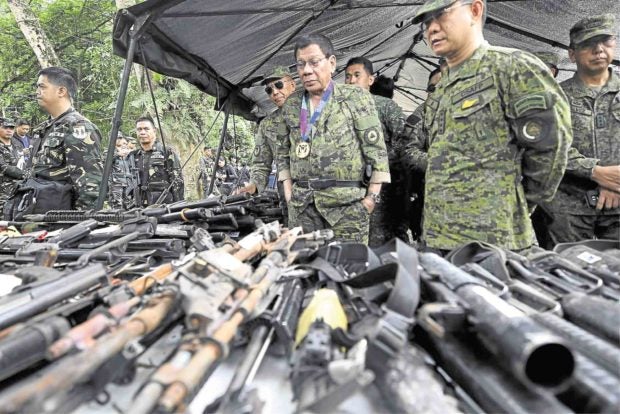 In this photo, taken Sept. 15, 2017, President Rodrigo Duterte checks looks at weapons recovered by government troops from Maute Islamic militants in Marawi City. An SWS survey showed that a majority of Filipinos were satisfied with the government’s response to the Marawi crisis. (Photo from the Presidential Photographers Division)

A majority of 66 percent of Filipinos were satisfied with the government’s response to the Maute crisis, according to the latest survey of the Social Weather Stations (SWS).

The survey, posted by the SWS on its website on Sunday, found 66 percent of respondents satisfied, 18 percent dissatisfied, and 16 percent undecided with the government’s efforts against the Maute group during its five-month siege in Marawi.

The net satisfaction was a “good” +48 percent, slightly lower than its +50 percent rating last June.

The survey conducted from Sept. 23-27 with 1,500 respondents nationwide had a ±3% percent margin of error.

The poll also showed that net satisfaction for President Rodrigo Duterte and the administration’s performance in fighting terrorism and reconciliation with Muslims rebels was “highest” among those who were satisfied with the government’s actions against the Maute group.

The survey likewise showed that 54 percent of the respondents believed that the Armed Forces of the Philippines (AFP) can suppress the crisis in Marawi even without the martial law declaration. /cbb