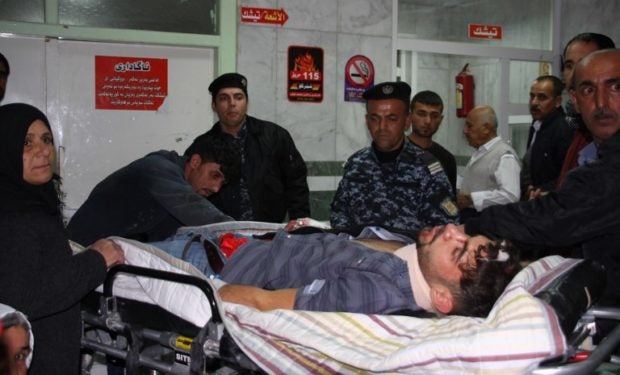 An earthquake victim is aided at Sulaimaniyah Hospital on November 12, 2017, in Sulaimaniyah, Iraq. Officials in Iran reports at least 30 dead and Iraqi officials 6. The US Geological Survey said the magnitude 7.3 temblor was centered 30kms (19 miles) southwest of Halabja, Iraq, near the border with Iran. AFP

TEHRAN, Iran — About 67 people have been reported killed when a magnitude 7.2 earthquake hit near the Iran-Iraq border region.

The Islamic Republic of Iran News Network quoted the head of the country’s emergency medical services, Pirhossein Koulivand, as saying early Monday that at least 61 had been killed and 300 injured on Iran’s side of the border.

Meanwhile, Iranian TV said Iraqi officials reported at least six dead on Iraq’s side of the border from Sunday’s quake. It says the officials also report more than 50 people were hurt in Iraq’s Sulaymaniyah province and about 150 were hurt in Khanaquin city. There has been no official report from Iraq’s government.

The U.S. Geological Survey says the quake was centered about 19 miles (31 kilometers) outside the eastern Iraqi city of Halabja.