Many residents displaced by the Marawi war still receive relief goods from the government, checking if their names are on the list posted at a DSWD office. —JEOFFREY MAITEM

MARAWI CITY — A multiagency government team in charge of rebuilding parts of the city flattened by the war between terrorists and government forces had given itself until Dec. 15 to finish up to 600 temporary shelters for displaced residents.

The government aims to build 1,200 temporary shelters on an 11-hectare land about 3 kilometers from the city center.

Five contractors were simultaneously building prefab houses under the supervision of the National Housing Authority. The Department of Public Works and Highways (DPWH) was building or repairing roads, preparing the housing site, landscaping and digging foundation holes.

Heavy equipment from DPWH provincial engineering districts in Mindanao had been deployed to the housing site to finish a road network by Nov. 25.

While there were delays because of the weather, Castro expressed confidence workers would meet the projects’ deadline.

One worker, however, said one of the reasons for the delay was lack of manpower. There were also delays in transport of materials, said the worker, who asked that he not be identified.

Omarashariff Yassim, a DPWH engineer, said some lot owners also prevented work because they had not been paid.

Farmers who were bound to lose crops were demanding compensation, too, Yassim said.

But Castro said these problems would not prevent workers from meeting deadlines.

He said a comprehensive rehabilitation plan for Marawi was in the works.

The TFBM was facilitating the return of families to nine villages cleared by the military of unexploded bombs.

The team was also ensuring there would be electricity and water supplies in these areas. 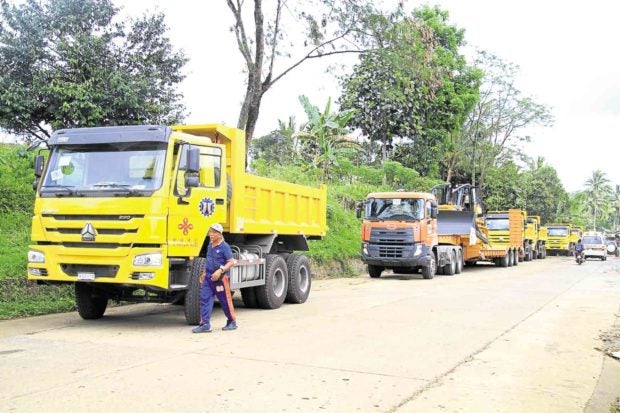 Some of the trucks and construction equipment donated by China for rebuilding Marawi City. —RICHEL V. UMEL

According to Castro, only three villages are still without water connection.

Nordjiana Ducol, Lanao del Sur Electric Cooperative general manager, said power had been restored to 63 of 96 villages as of Nov. 9.

Ducol said restoration of power supply to households was being done for free.

The task would be easier, he said, because China donated 47 pieces of heavy equipment.

Maria David, who is in charge of operations at the
DPWH 2nd engineering office, said clearing operations were a prelude to rehabilitation. —Divina Suson and Richel Umel