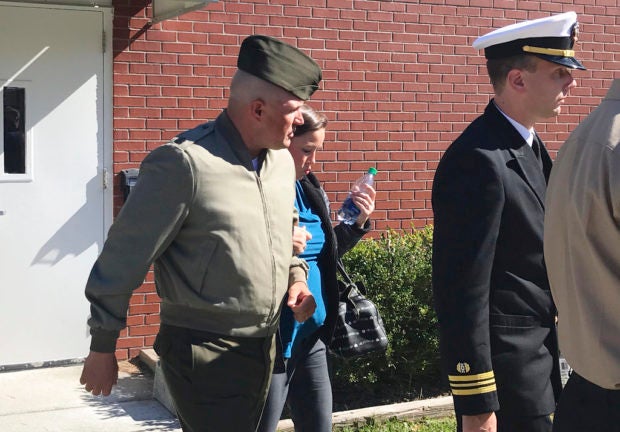 In this Oct., 31, 2017 file photo, U.S. Marine Gunnery Sgt. Joseph A. Felix, his wife, and his lawyers exit a courtroom after testimony at Camp Lejeune, N.C. A Marine Corps jury on Friday, Nov. 10, is deciding whether Felix should be sentenced to military prison time for choking, punching and otherwise tormenting recruits, especially Muslims, one of whom eventually hurled himself to his death down a stairwell. The eight-man jury at Camp Lejeune, N.C., also could sentence Felix to financial penalties and a dishonorable discharge. AP

RALEIGH, N.C. — A Marine Corps drill instructor was sentenced Friday to 10 years in prison for choking, punching or otherwise tormenting recruits, especially three Muslims — one of whom ultimately killed himself by leaping down a stairwell.

A military jury handed out the punishment to Gunnery Sgt. Joseph Felix a day after convicting him of abusing more than a dozen trainees at the Marine boot camp at Parris Island, South Carolina.

Among other things, he taunted the Muslims as “terrorists” or “ISIS” and ordered two of them to climb into an industrial clothes dryer, spinning one of them around in the scorching machine until he renounced his faith, the jury decided.

Felix, a 34-year-old Iraq veteran, was also ordered to forfeit all pay, demoted to private and given a dishonorable discharge.

Felix was a central figure in what was found to be a group of abusive drill instructors at Parris Island. After the March 2016 suicide at the base, a hazing investigation led to charges against Felix, five other drill instructors and the training battalion’s commanding officer. Eleven others faced lesser discipline.

Abusive drill instructors have long been stock characters in books and movies like “Full Metal Jacket.” But that 1987 film was set during the Vietnam War, and the Felix trial shows that since then the Marines have drawn clearer lines between what instructors can and cannot do, said Michael Hanzel, a former Navy attorney who attended the proceedings at Camp Lejeune, North Carolina.

“This generation now, there’s things that I think that we’re much more focused on. In particular, in this trial, it’s calling people names based on their religion and targeting people based on their religion,” said Hanzel, now a private attorney specializing in military law. “I don’t think anyone would say that was acceptable ever, but it probably was not prosecuted in the past the way it would be now.”

The charges against Felix included commanding recruits to choke each other; ordering them to drink chocolate milk and then training them until they vomited; and punching recruits in the face or kicking them to the ground.

“He wasn’t making Marines. He was breaking Marines,” prosecutor Lt. Col. John Norman told the jury on Wednesday. He called Felix a bully who heaped special abuse on three Muslim recruits because of their faith.

One of them, Raheel Siddiqui, a 20-year-old Pakistani-American from Taylor, Michigan, hurled himself to his death after what the jury decided was mistreatment by Felix that included slapping Siddiqui and calling him a terrorist. Siddiqui’s family sued the Marine Corps last month for $100 million.

The government did not charge Felix with any crime directly related to Siddiqui’s death. The judge, Lt. Col. Michael Libretto, did not allow testimony about whether Felix’s actions were responsible for the recruit’s suicide.

Felix also was convicted of ordering Lance Cpl. Ameer Bourmeche into a dryer, which then was turned on as Felix demanded, “Are you still Muslim?” Bourmeche testified that he twice affirmed his faith and Felix and another drill instructor twice sent him for a bruising, scorching tumble inside the machine.

After a third spin, Bourmeche said, he feared for his life and renounced his religion. The drill instructors then let him out, he said.

Felix was found guilty as well of ordering Bourmeche to simulate chopping off the head of a fellow Marine while reciting “God is great” in Arabic.

The jury decided Felix also ordered Rekan Hawez, a native of Iraqi Kurdistan, to climb into the dryer. The machine was never turned on.

Felix was convicted, too, of rousing nearly two dozen recruits from their sleep, ordering them to lie on the floor, and then walking on them along with two other drill instructors.