Duterte decries human rights violator tag: ‘Why only me?’ 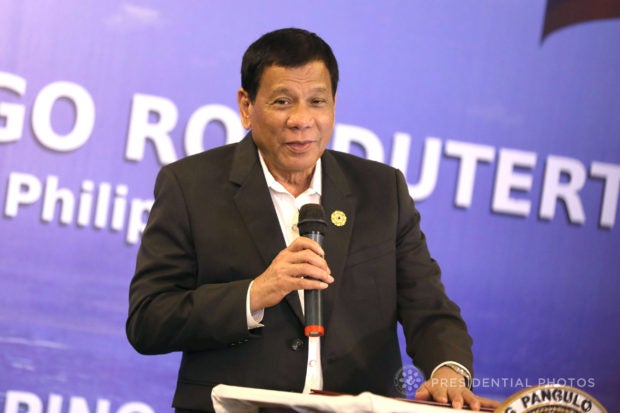 President Rodrigo Roa Duterte makes a remark during the meeting with Filipinos residing in Vietnam at the Pulchra Resort in Da Nang City on November 9, 2017. (KARL NORMAN ALONZO/PRESIDENTIAL PHOTO)

This was the question raised by President Rodrigo Duterte, as he volunteered to host a “world summit” on human rights in the midst of various criticisms he has been receiving for his brutal campaign against illegal drugs.

“We should call a summit. And I will volunteer to make the Philippines the venue,” Duterte said during a late night press conference in Vietnam on Thursday.

According to Duterte, the summit should focus on human rights not just in the Philippines but also across the globe. He said that the conference must tackle how to “protect the human rights for all human race.”

“What makes the death of people in the Philippines more important than the rest of the children in the world that were massacred and killed. ‘Di ba?” he said.

“World summit on human rights. Kita mo, lalabas lahat ‘yan diyan. And all the victims of human rights violation are invited to come and air their gripe or grievances,” he added.

“Bakit ako lang? There are so many violations of human rights, including sa United States, including the continuous bombing in the Middle East killing civilians. Pati mga bata, eskwelahan nila,” he said.

Asked if he would request the United Nations to monitor his proposed human rights summit, Mr. Duterte said he prefers “a panel of lawyers” to do it.

“I’m more comfortable with a panel of lawyers. Because they will understand immediately the legal implications,” he noted, adding that he might also invite “experts in the science of medicine” and the “destruction of the human body.”  /kga