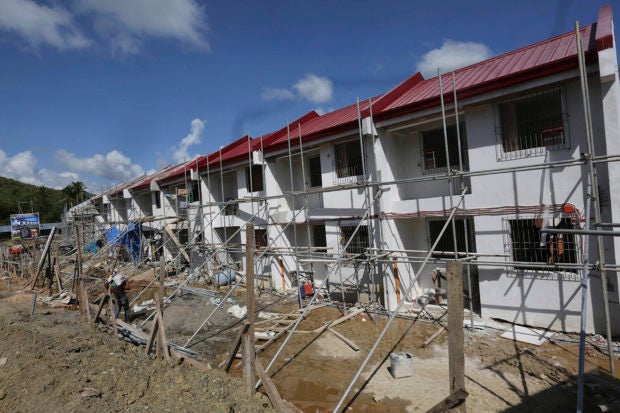 During his trip to Tacloban City, Leyte province, in January, President Duterte warned officials of the National Housing Authority (NHA) and other government agencies involved in the relocation of families displaced by Supertyphoon “Yolanda” four years ago that he would make them carry crosses in front of the storm victims if they failed to finish the housing project by the end of March.

But not even his warning could hasten the completion of the project, even in Tacloban City, considered ground zero for Yolanda (international name: Haiyan).

According to the NHA status report, only 33 percent of the fully completed housing units have been occupied by the beneficiaries.

Only 26,256 units spread across 14 provinces and Tacloban, or a little more than half of the 54,180 houses that are ready for occupancy (RFO), have been occupied.

The number of RFO units has not  even reached half of the 205,128 houses that the NHA has planned to build in Palawan, Masbate, Aklan, Antique, Capiz, Iloilo, Negros Occidental, Cebu, Tacloban City, Leyte, Eastern Samar, Samar, Southern Leyte, Biliran and Dinagat Island.

According to the NHA status report, delays in the issuance of permits, licenses, clearances and other documentary requirements set back the development of the project.

According to Presidential Assistant Wendel Avisado, who has been designated to oversee and supervise the Yolanda Rehabilitation Project, it would take up to two years just to secure the necessary government permits and clearances.

Before the NHA can start building, the resettlement site should be titled under the agency’s name.

Titling takes a long process—securing permits from barangay and municipal councils; reclassification of the lot if it is agricultural, planted to coconut or covered by the agrarian reform program, or timberland, among other reasons.

Once the property is “sold” to the NHA, tax exemption must first be secured from the Bureau of Internal Revenue before the registry of deeds can issue the title.

This, however, involves only property that can be titled.

Avisado said the procedure must be simplified, say, certification from the NHA should be sufficient for the concerned agencies to expedite the permits and clearances.

Another cause of delay is the lack of proposals from contractors and developers in areas, such as Camotes and Bantayan islands and some parts of Aklan and Samar.

One reason could be difficulty in getting titles in Camotes since, according to the status report, the island was classified in 1981 as mangrove area under Proclamation No. 2252.

The NHA has planned to build 3,153 housing units in the towns of San Francisco, Poro, Tudela and Pilar on Camotes, but not a single site has been developed though the units have already been bid out.

In cases where there are no bidders for the projects, Avisado said a memorandum of agreement was drawn between the NHA and the local governments for the development of the projects by the municipalities so the funds could be released.

For sites where there have been two failed biddings, the NHA has resorted to negotiated bidding, according to the status report.

There are also problems with ongoing projects. Among these is the absence of utilities.

Since water and power are not included in the NHA budget to build the house, the Local Water Utilities Administration and the National Electrification Administration have to work with local water districts and power distributors to provide water and electricity in the relocation sites.

Contractors or developers have been asked to provide shallow wells while water pipelines are being laid.

In Samar, the status report points to problems with the survey: technical description on the title unreconciled with the approved cadastral survey or existing boundaries, adverse claims by other entities, and boundary disputes.

The report says a joint survey has been undertaken by the developer and the NHA to settle the problem.

Another problem is the lack of sustainable livelihood programs for families who have been forced to move to a new place.

Juanito Merto, 60, was a recipient of a housing unit in one of the resettlement sites in Tacloban. But he returned to his old house at a coastal village in San Jose district where he and his wife, Teresita, 51, maintain a sari-sari store.

At their store in Barangay 88, they could earn P500 a day on the average, enough for them to meet their daily needs, he said.

Avisado said there must be an “integrated strategy and approach” to resettlement, as Yolanda would not be the last calamity to hit the country.

As the NHA has moved its deadline to finish all Yolanda housing projects by 2019,  Avisado said he sent a memo to President Duterte proposing the issuance of an administrative order to hasten the completion of the projects by streamlining the issuance of clearances, permits and licenses to cut short the long process.

He proposed that certification from the NHA that the area had been identified as a resettlement site for calamity victims should be enough for all government agencies concerned to issue all clearances and permits.

At present, the contractor or developer of the project secures all the permits and clearances.

Avisado proposed that the NHA be the one to secure all the requirements to hasten the process, the transactions being between government agencies.

At that same time, he said the NHA’s job should not be just building houses but also putting up power and water connection at the sites, schools, day-care and health centers, among other things, to make the resettlement sites livable communities.

Skills training should also meet industry needs in the area, he said.

The budget for all these projects should be released to the NHA and not to the different agencies, which follow different timelines, he said.

If these support services are not provided for, those in the resettlement sites will be forced to go back to their devastated villages, he said.  —WITH REPORTS FROM JOEY A. GABIETA AND CARLA P. GOMEZ