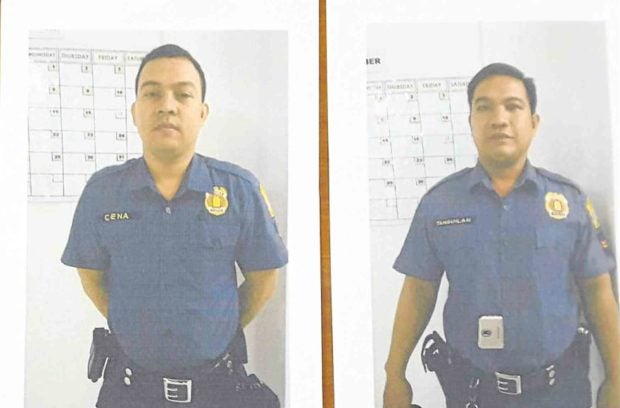 More than a year since passing an ordinance against catcalling and other acts of sexual harassment in public places, Quezon City has its first test case which, ironically, puts two law enforcers on the spot.

In a press conference on Thursday, Chief Supt. Guillermo Eleazar, Quezon City Police District (QCPD) director, identified PO1 Domingo Cena and PO2 Ric Tanguilan, both from QCPD Station 8, as the officers accused by a 21-year-old woman of catcalling her as she walked on the street.

Cena and Tanguilan, whose photos were shown during the briefing, were charged with violating Ordinance 2501 or the amended City Gender and Development Code, in the city prosecutor’s office. If found guilty, they face a fine of up to P5,000 or a month in jail.

The two policemen have been relieved of their posts and placed on floating status, Eleazar said.

The complainant, “Sandy,” positively identified Cena as one of the two policemen who catcalled her as she was walking on Katipunan Avenue on the night of Nov. 2.

In a social media post, Sandy said she noticed a police car driving by her around 10:30 p.m. and saw the person in the passenger seat smirking and looking at her “maliciously.” She then heard the one behind the wheel wolf-whistle at her.

According to Sandy, she did not take photos of the incident out of fear.

But as her post went viral, the QCPD launched an investigation. Eleazar said a team led by Senior Supt. Arthur Bisnar, QCPD deputy for operations, identified patrol car No. 235 as the one involved in the incident as it was the only mobile unit active in the area at that time.

Cena was revealed to be the officer in the passenger seat after a CCTV footage at a gas station showed him alighting from the patrol car. He was later positively identified by Sandy, Eleazar said.

“This is a landmark case in Quezon City, being the first [to be filed] against catcalling. We are really focusing on this case. What we are trying to change here is the cultural mindset of men toward women,” the QCPD director added. “We want to show that it’s not a compliment to catcall [women], especially if those doing it are policemen who are supposed to enforce the law.”

Eleazar said Cena and Tanguilan would also be facing administrative complaints along with their immediate superior, SPO2 Ariel Camiling.

This is because Camiling tried to “mislead” investigators by claiming that patrol car No. 235 did not pass through the area at the time reported by the complainant, Eleazar said.

Camiling’s claim proved false as it was later discovered that he was supposed to be in that car that night but was replaced by Cena.

“(Camiling) was not feeling well that’s why he asked Cena to take over. Camiling did not tell us that it was Cena who was in the car,” Eleazar said.

The three policemen declined to comment on the complaint.

Speaking to reporters, Sandy said: “I got more afraid because I was alone—and policemen are involved. I got catcalled before but this one was scarier.”

She said she was “very much satisfied” by the action taken by the QCPD. “It took me a while to reach out. The police are very hands-on and I was assured that they will not take the case for granted.”

“I want to encourage other women to report similar incidents, even if the offenders are average citizens. The process may be tedious but we should report (the harassment) to put an end to it,” she added.