Trump reaches out to North Korea in restrained speech 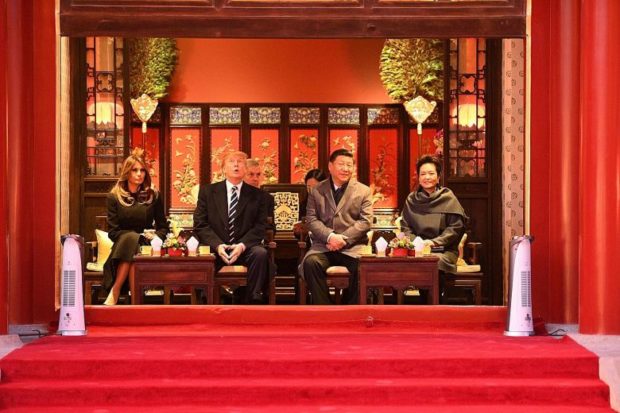 US President Donald Trump and Chinese President Xi Jinping with US First Lady Melania Trump and Mr Xi’s wife Peng Liyuan during a tour of the Forbidden City in Beijing yesterday. AFP

US President Donald Trump has offered North Korea an alternative path towards a “much better future”, while at the same time calling on the world to join forces to confront the regime’s nuclear threat.

In a speech analysts described as restrained but “very presidential” yesterday (Nov 8), Mr Trump urged all responsible nations to isolate North Korea by implementing United Nations sanctions, downgrading diplomatic ties and cutting off all trade links with the regime.

The US leader, who was speaking in the South Korean National Assembly, also sent a direct message to North Korean leader Kim Jong Un, with whom he has traded bellicose insults and threats.

“Every step you take down this dark path increases the peril you face… North Korea is not the paradise your grandfather envisioned. It is a hell that no person deserves.”

The US can offer “a path towards a much better future”, Mr Trump said. “It begins with an end to the aggression of your regime, a stop to your development of ballistic missiles and complete, verifiable and total denuclearisation.”

North Korea’s nuclear crisis has dominated Mr Trump’s 12-day Asia tour that has so far taken him to Japan and South Korea. He arrived in Beijing yesterday.

Pyongyang, which last launched a missile test on Sept 15, has ruled out talks and vowed to continue boosting its nuclear prowess. In a commentary yesterday, the state-owned Rodong Sinmun newspaper accused Mr Trump of strengthening military threats and trying to “light the fuse for a nuclear war”.

Mr Trump did not go into details about how North Korea can choose the better path. But he made it clear that while the US seeks a peaceful resolution, it will not hesitate to assert its military might if necessary.

“The regime has interpreted America’s past restraint as weakness. This would be a fatal miscalculation… Do not underestimate us, and do not try us,” he said, adding that the US has a “nuclear submarine, appropriately positioned” nearby. Three US aircraft carrier strike groups are slated to hold an exercise in a rare show of force. “I want peace through strength,” he added.

Analysts said the speech, for which Mr Trump received a standing ovation, was firm yet measured, as he sought to assuage South Korean concerns of a looming war if the US were to pursue unilateral military action.

He devoted a large part of his speech to hailing South Korea’s post-war achievements, while slamming the North’s cult-like rule and human rights abuses. He also avoided broaching the tricky issues of trade and defence cost sharing.

Professor Kim Jae Chun of Sogang University said Mr Trump “exercised restraint and used more moderate language”, but still managed to “impart a strong message to North Korea”. There was no repeat of provocative words like “fire and fury” or “rocket man”.

Dr James Kim of The Asan Institute for Policy Studies said: “He looked very presidential today… He emphasised the important point of ‘peace through strength’.”

Some noted that Mr Trump did not offer any tangible solution.

Dr Sue Mi Terry, senior fellow at the Centre for Strategic and International Studies, felt Mr Trump “said all the right things”, but there was nothing “really new”.

Agreeing, Dr Balbina Hwang, visiting professor at Georgetown University, said: “There was nothing Kim Jong Un has not heard before.”