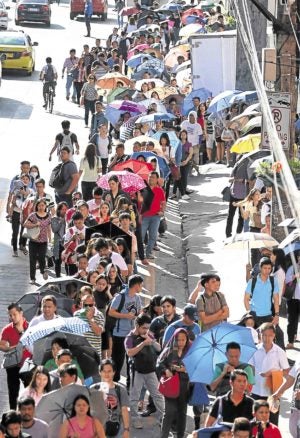 Long lines form at an MRT 3 station on Edsa as the number of operating trains on Tuesday go down to 13 from the ideal number of 20. —EDWIN BACASMAS

Transport officials will meet on Wednesday to discuss how to assist commuters while the government is still working on increasing the number of Metro Rail Transit 3 (MRT 3) trains operating during rush hour.

Leah Quiambao, assistant secretary for communications of the Department of Transportation (DOTr), said on Tuesday that the Land Transportation Franchising and Regulatory Board and several city bus operators had been tapped to deploy buses to ferry passengers, especially when long lines form at MRT 3 stations.

Among the issues to be taken up in today’s meeting are fares to be charged by those buses, their stops and the length of their deployment.

On the first day the DOTr took over maintenance of the MRT 3, a train bogged down due to technical problems at 6 a.m. before it could leave North Avenue station.

This left just 13 trains operating during the morning rush hour instead of the ideal 20 trains. As a result, long passenger queues formed at the southbound stations of North Avenue and Quezon Avenue. In fact, the line at Quezon Avenue station reached all the way to Sgt. Esguerra Street.

According to Quiambao, dispatching buses to ferry commuters to their destinations is just a “remedial measure” while they work on purchasing the needed spare parts for the train system while looking for a new maintenance provider.

On Monday, the DOTr cut short its three-year contract with maintenance provider Busan Universal Rail Inc. over its “poor performance” and “failure to put in operation reliable and efficient trains.”

Cesar Chavez, the DOTr undersecretary for rails, earlier vowed to improve the safety and reliability of the country’s busiest train system “within three to six months.”