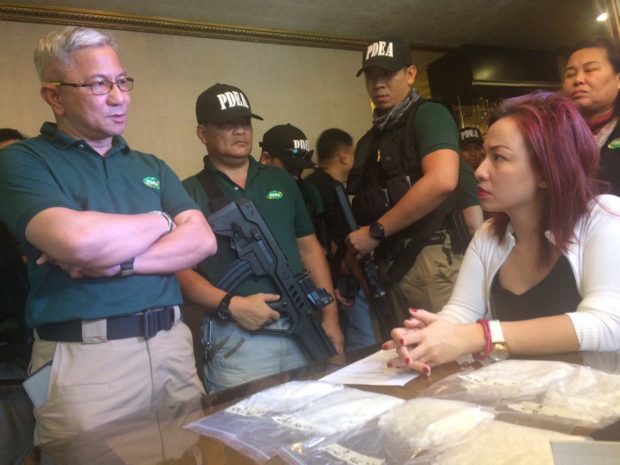 (We are reposting this story to correct an earlier version published on Nov. 6, 2017 at 6 p.m. which misstated that arrested drug suspect Diane Yu Uy has been given security detail from  the Special Action Force and the Presidential  Security Group. The security detail to Uy was actually from the Police Security and Protection Group or PSPG. We apologize for the error.)

The daughter of convicted drug queen Yu Yuk Lai has been given a security detail provided to VIPs (Very Important Persons).

Yu’s daughter, Diane Yu Uy was arrested in an early Monday morning raid at her condominium unit along General Solano Street, San Miguel Manila which is only 600 meters away from Malacañang Palace.

Uy’s security detail has been identified as Police Officer 3 Walter Vidad from the Police Security and Protection Group (PSPG) of the Philippine National Police (PNP), not the Presidential Security Group or the Special Action Force as earlier reported.

PSPG’s mandate is to provide security and protection to national government officials, foreign dignitaries and certain private individuals approved by the PNP.

Further investigation revealed that she has managed to sneak illegal drugs into the Correctional Institute for Women (CIW) as she has a special VIP access being one of the contracted suppliers for the catering facilities of the prison.

Uy’s security detail was discovered during the raid conducted by joint operatives of the Philippine Drug Enforcement Agency (PDEA) and operatives from the Bureau of Corrections (BuCor) and the Philippine National Police-National Capital Region Police Office (PNP-NCRPO).