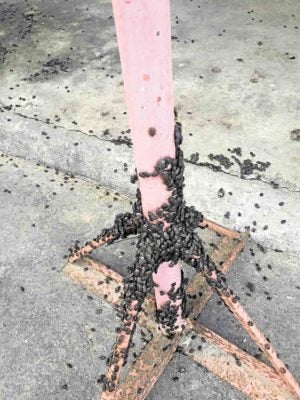 VILLASIS, Pangasinan — Like a scene in the biblical plague, millions of rice black bugs (RBB) swarmed over residential areas of this agricultural town and Urdaneta City on Friday night during the full moon, blackening houses and streetlights and inundating rice fields.

“The RBB came from the rice field where they damaged palay crops that were planted late,” said Rene Mundo, Villasis municipal agriculturist.

“The bugs are migratory and during full moon, they fly toward the east when attracted by lights,” he said.

But once the bugs attach themselves to light bulbs, the heat fries their inner wings until they fall dead, he said.

“The scene was worse in Urdaneta City where all the street lights turned black and the roads were filled with the bugs,” he said.

Mundo said the bugs first struck the towns of Asingan, Umingan, San Manuel and Binalonan weeks ago, before attacking agricultural lands in Barangay Unzad, Baraca, Tombod and Labit in Villasis.

The bugs consume palay that are about to be harvested and have been known to swarm over neighboring fields.

They are resistant to insecticides. Some farmers put up light traps laced with mercury in their farms where the pests would be concentrated.

The rice fields are often flooded to drown the bugs.

Since 2013, the bugs had been infesting rice fields but the recent attacks took place near residential and commercial areas. Damage estimates were not available as of Saturday.

The Department of Agriculture Regional Crop Protection Center gave farmers a technical briefing as to how a biological control agent called green muscardine fungus (metharhizium anisopliae) should be introduced to destroy the bugs, Mundo said.

The fungus spores attach to the bugs, germinate and grow, penetrating their outer shell until they die, he said. If the breeding ground is not destroyed, the bugs can live up to seven months and will continuously reproduce, he added.

The RBB was of one of the reasons harvest in Villasis plummeted to 70-75 cavans from an average yield of 120-130 cavans per hectare. —Yolanda Sotelo