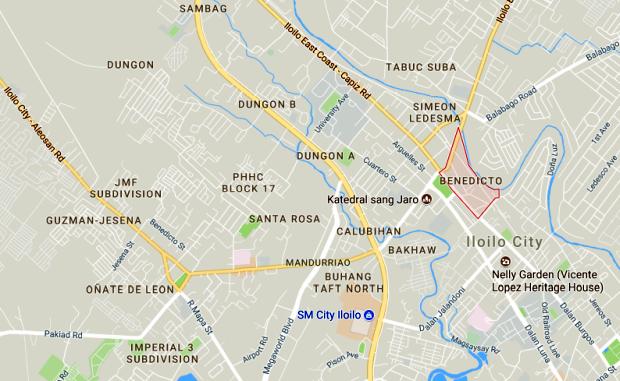 Barangay Benedicto (shaded in red) in Jaro District in Iloilo was the site of a huge fire on Saturday, Nov. 4, 2017. (Image from Google Maps)

ILOILO CITY — Jonah Porras, 33 and a single parent, is at a loss on how to start again with her children aged 13 years old and one year and three months.

Except for the school card of her elder child and a few pieces of clothing of her younger one, all her belongings and their house were lost during a large fire that engulfed a neighborhood in Barangay Benedicto in Jaro District here on Saturday afternoon.

“I don’t know what to do because I have to start from nothing again,” she told the Inquirer.

Her family is among the 56 families or 224 individuals that are staying at the Jaro District Gymnasium which serves as an evacuation for fire victims.

Sixty-eight houses were burned down and four others were damaged in the fire that started around 3:40 p.m. and put under control about 4:35 p.m.

One hundred five families or 461 individuals were affected by the fire, according to a report of the city social welfare and development office as of 11 a.m. Sunday.

The fire started at the second floor of the two-story house of Reynaldo Ledesma and spread to other houses, according to a report of the City Risk Reduction and Management Office (CDRRMO).

The cost of damage is estimated to reach around P4 million, according to the CDRRMO report.

Fire investigators are still determining the cause of the fire.

Porras, who as at their house tending to her variety store, said the flames spread quickly and she had no time to get their belongings out.

“I prioritized getting the school card of my elder child because she was supposed to transfer school,” she said.

The city government has provided assistance to the evacuees and others affected by the fire.

Donations of food, canned food, bottled water, rice and used clothing have also poured in for the evacuees. /atm