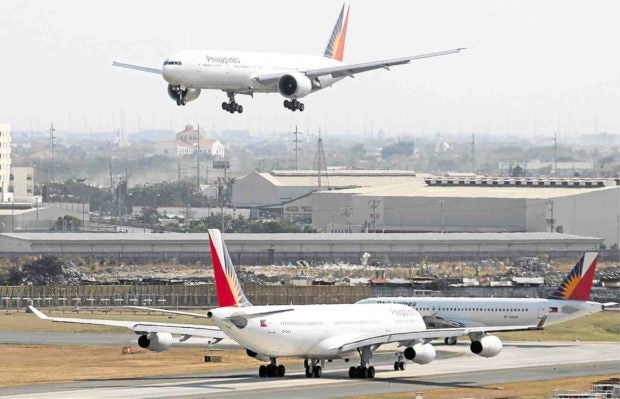 Flag carrier Philippine Airlines (PAL) settled almost P6 billion in obligations to the government on Friday, in line with a recent deal to settle years worth of unpaid navigational fees, the Department of Transportation (DOTr) said.

PAL paid the amount ahead of the December 2017 deadline, the DOTr said.

The flag carrier settled its arrears with funds it had borrowed, according to company president Jaime Bautista.

The settlement came after President Duterte in September threatened to shut down Terminal 2 of Ninoy Aquino International Airport (Naia), exclusively used by PAL, if the airline owned by taipan Lucio Tan did not settle its arrears in 10 days.

Acting presidential spokesperson Harry Roque said in a statement the settlement “underscores our strong commitment to decisively act on matters that would greatly benefit the nation’s best interest.”

He said the money “will go a long way in funding the administration’s priority programs.”

The DOTr initially calculated the arrears at around P7.3 billion. After a brief negotiation to reconcile and verify the figures, the final amount of P6 billion was reached. The matter was resolved within 10 days.

The DOTr said PAL paid the amount in two checks.

One check for P5.68 billion was turned over to the Civil Aviation Authority of the Philippines and the other for P258.59 million, net of taxes, was handed to the Manila International Airport Authority.

Bautista said last week the payment would be financed by added debt.

“We have to borrow money to pay for it,” he said. “There is a facility that we can tap.”

Bautista has appealed to the government to address infrastructure constraints and congestion at Naia, the country’s main gateway.

When it was still government-owned, PAL enjoyed privileges such as the waiver of landing, takeoff and other fees. The government said those privileges were considered removed after PAL was privatized in the early 1990s.