‘IS recruiter’ Hamidon cries: ‘I feel deprived of my right’

The woman who allegedly used social media to recruit Islamic State (IS) fighters has accused the National Bureau of Investigation (NBI) of denying her of her right to counsel.

Wearing handcuffs and escorted by NBI agents, Karen Aizha Hamidon appeared before the Department of Justice (DOJ) on Friday for the first preliminary investigation on the rebellion or inciting to rebellion complaint filed against her. 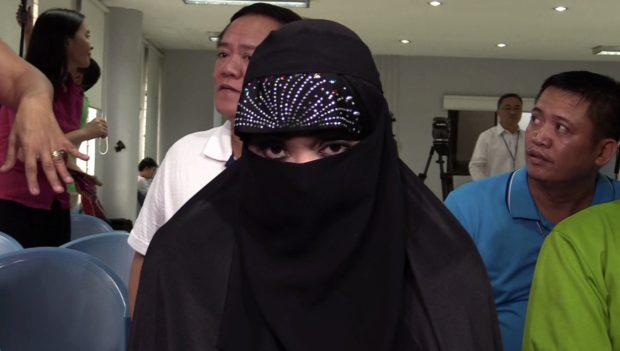 Karen Aizha Hamidon appeared before the Department of Justice (DOJ) on Friday, November 3, 2017, for the first preliminary investigation on the rebellion or inciting to rebellion complaint filed against her. (INQUIRER.net / Ryan Leagogo)

“I feel deprived of my right for legal counsel as stipulated in the Constitution,” Hamidon told reporters after Friday’s hearing.

The suspect said she was only provided with lawyers from the Public Attorney’s Office (PAO) during the inquest proceedings and during a closed-door interview with the media.

Even while she was not yet required to do so, Hamidon insisted on submitting a handwritten counter-affidavit, but Senior State Prosecutor Peter Ong ordered her to just submit it on the next hearing, which was scheduled on November 10.

However, NBI agent Joshua Raymundo refuted Hamidon’s accusations and said that she was provided with PAO lawyers on October 12, the night she underwent inquest proceedings.

“After that, dapat bahala na siya kumontak lawyer niya. Kilala na niya PAO lawyer niya [she should be the one to contact her lawyer. She already knows her PAO lawyer],” he added.

In a separate interview, Ong said he did not let Hamidon write her affidavit on the spot because she might get the details wrong.

“Kaya hindi ako pumayag, una ako magaling din ako magsulat pero kahit anong galing mo on the spot magkakamali ka. So I wanted to give her all the opportunity,” Ong told reporters after the hearing.

(That’s why I did not let her write her counter-affidavit. First, I am good in writing too, but however good you are, you’ll commit errors if you write on the spot. So I wanted to give her all the opportunity.)

Hamidon was the wife of the late terrorist leader, Mohammad Jaafar “Tokboy” Maguid, and ex-wife of another extremist, Singaporean Muhammad Shamin Mohammed Sidek, who was closely linked to the IS or Isis.

She denied the allegations against her, claiming she was just in-charge of “propagating Islam” in social media.

Read Next
SC to deploy buses for bar examinees, personnel in case of bad weather
EDITORS' PICK
Metro Manila to remain under COVID Alert Level 2 until December 15
IATF tightens border control, suspends entry of fully vaxxed nationals from ‘green’ countries
Villar Group gears up for AllValue Shopping Party on Dec. 3; around P 1-million promos and discounts up for grabs
Duterte open to making jabs mandatory; Cabinet mulls ‘pressuring’ the unvaccinated
Legarda: Ending Violence Against Women, a cause for all
A delightful blessing!
MOST READ
Quiboloy warns of ‘much worse than Omicron virus’ if his ‘persecution’ is not stopped
Marcoleta defends pol ads on ABS-CBN
Omicron poses ‘very high’ global risk, countries must prepare–WHO
Gov’t plans to open COVID-19 vaccination for 5- to 11-yr-olds by January 2022
Don't miss out on the latest news and information.