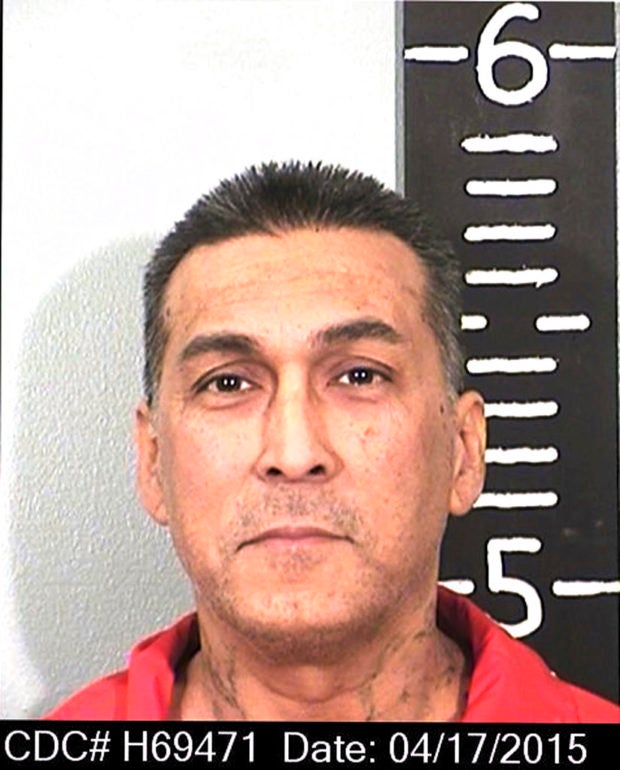 Former Mexican Mafia boss Rene “Boxer” Enriquez. California Gov. Jerry Brown has again blocked parole for Enriquez, even if he now helps law enforcement, saying the double-murderer remains a danger to society. For the third time in three years, Brown overruled on Thursday, Nov. 2, 2017, a parole panel decision to free Enriquez from prison. (This photo taken last April 17, 2015 is from the California Department of Corrections and Rehabilitation via AP)

SACRAMENTO, California – Governor Jerry Brown blocked on Thursday the parole for Rene “Boxer” Enriquez, saying the former Mexican Mafia prison gang leader remains a danger to society despite efforts to turn his life around and years of cooperating with law enforcement.

For the third time in as many years, Brown reversed a state parole panel decision that Enriquez should be freed from jail.

Enriquez has been in prison since 1993, serving a sentence of 20 years to life for two murders, multiple assaults, and drug trafficking conspiracy.

Enriquez is not expected to be eligible for another parole hearing for more than a year, said Laura Sheppard, his lawyer.

“I think he’s absolutely deserving of parole. If I didn’t, I wouldn’t be representing him,” Sheppard said. “I think he’s no danger to society.”

In his parole release review, Brown wrote that Enrique joined the Mexican Mafia in 1985 while serving time for rape and armed robbery. For nearly two decades while in and out of prison, Brown said that Enriquez bolstered his reputation in the gang through murder, drug-running, and terror.

Enriquez is said to have killed two gang associates for violations such as stealing drugs and money. Enriquez, along with another man, was also said involved in the stabbing of Mexican Mafia leader Salvador “Mon” Buenrostro 26 times with inmate-made weapons in a 1991 gangland dispute. Buenrostro survived that attack.

However, Enriquez has said he quit the gang in 2002 when he realized members were killing children and innocent relatives of gang members who fell into disfavor.

Enriquez has been cooperating with authorities for 15 years, providing information and testifying against the gang. During previous parole consideration, he received dozens letters of support from the FBI, local law enforcement officials, and state and federal prosecutors.

“The DA offices of three different counties are supporting his parole,” his attorney said.

Brown acknowledged that Enriquez has become a model prisoner and commended him for efforts to turn his life around.

However, Brown said the former gang member has been personally responsible for “an immeasurable amount of death and destruction.”

Enriquez only recently alleged that his path of violence was prompted by childhood physical and sexual abuse by family members. But Brown wrote that the explanation did not explain his “single-minded pursuit of violence and control.”

“I still do not believe that he has shown an adequate understanding of why he was so willing to devote himself to brutality and gang leadership,” Brown noted.

The governor asserted that Enriquez is still considered an enemy of the Mexican Mafia, implying there could be attempts to kill him that would put his family, parole agents, and the community where he might live at risk.

In 2016, Enriquez said he would enter a witness protection program if he is released.

But Brown argued that there currently was no plan in place that would mitigate the serious risks posed by the release of Enriquez.            /kga