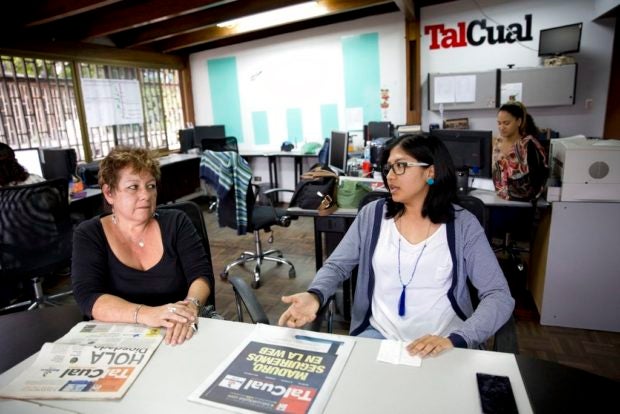 Gloria Villamizar, left, and Luisa Quintero, journalist of newspaper “Tal Cual” speak during an interview at their headquarters in Caracas, Venezuela, Thursday, Nov. 2, 2017. Editors and reporters at the feisty independent newspaper say they are ending their print edition and will publish only an online edition. AP Photo

Launched in 2000 by a former leftist guerrilla fighter, the newspaper “Tal Cual” will continue to tell stories of the country’s tumultuous times as an internet-only publication.

The newspaper’s edgy stories and cutting opinion pieces over the years have drawn blowback from the government, including a defamation lawsuit filed by Diosdado Cabello, then president of the National Assembly, which was later dropped. 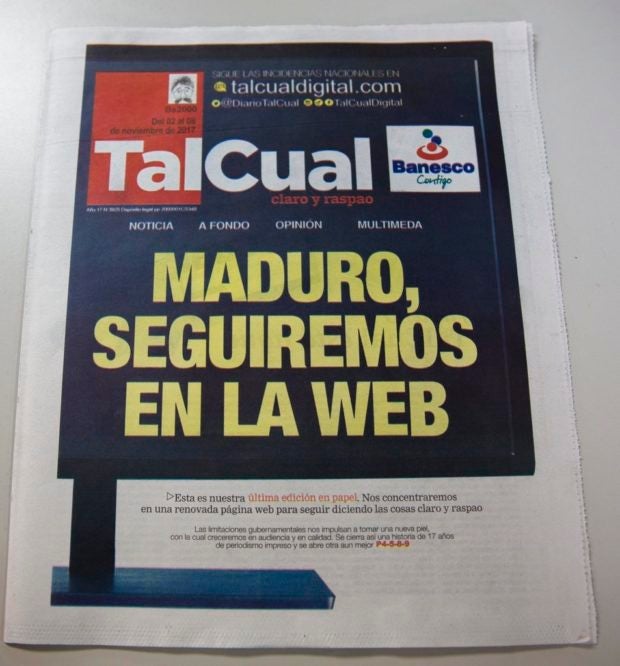 A picture of the front-page of newspaper “Tal Cual” with the headline in Spanish reading “Maduro, we will continue on the web,” is shown in Caracas, Venezuela, Thursday, Nov. 2, 2017. AP Photo

It’s 26-year-old editor, Luisa Quintero, said she views the changing platform as a reinvention — not a step backward.

“This country doesn’t give us time to mourn,” Quintero said. “We won’t have paper, but we’re going to keep working.”

Newspapers around the world have faltered in recent years under economic stress and declining advertising revenue. The problem is compounded in Venezuela, a country beset by triple-digit inflation.

The newspaper said its move to a digital format is driven by the scarcity of newsprint controlled by the Venezuelan government and the astronomical cost of importing paper on its shoestring budget.

Founding editor Teodor Petkoff is a former guerrilla fighter who later entered the government as the country’s planning minister and ran for president. He launched Tal Cual by calling out political rival and charismatic former President Hugo Chavez with a front page headline: “Hola, Hugo.”

At its height, “Tal Cual” circulated just 15,000 copies throughout the country, but it packed a punch.

Now age 85 and in poor health, Petkoff has stepped away from daily operations of the newspaper, but the editorial content remains unrelenting.

Gloria Villamizar, 54, has been on staff since the paper launched. She lamented its third major format shift — from a daily print publication to a weekly circular and now digital-only. But Villamizar, director of the opinion section, said that she and her colleagues aren’t letting down their guard.

“Either way, we will be telling the stories,” she said. /jpv

Read Next
Suspect hastily left job hours before shooting spree at Walmart in Colorado
EDITORS' PICK
10 Filipinos positive for COVID-19 in UK, 7 in Ireland — envoy
Nograles: Cabinet members to donate 75% of monthly salary to aid COVID-19 fight
Quick chat with Nicole Andersson: ‘You really don’t need much to be happy’
IATF to LGUs: Issue ordinances vs attacks on frontliners, COVID-19 patients
Diokno to Duterte: OK to make fun of buck tooth, but focus on people’s needs first
Robredo spox thanks Duterte for defending VP’s efforts vs COVID-19
MOST READ
Coronavirus hotbed Rizal to shut borders on April 6
ADB warns PH against prolonged lockdown
Gov’t mulling quarantine period extension of 15-20 more days
Sotto on Isko Moreno’s call: We do our job without the media following our every move
Don't miss out on the latest news and information.