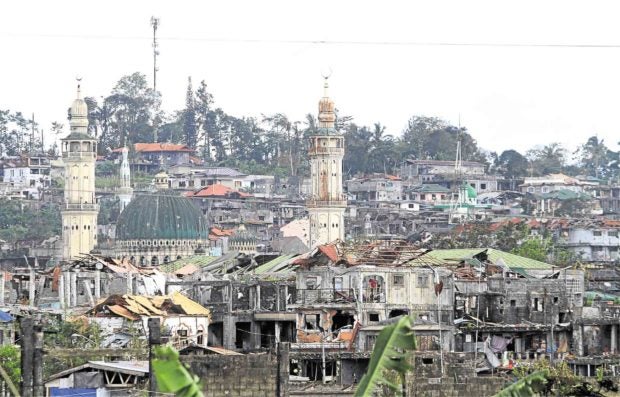 Marawi officials appeal for help as they prepare to rehabilitate the city following a five-month fighting between government soldiers and terrorists.  (INQUIRER FILE PHOTO)

An alleged right-hand man of Isnilon Hapilon, the touted emir of ISIS in Southeast Asia, and another fighter of the Maute terrorist group were killed in latest clashes in Marawi City, the military said on Thursday.

Authorities identified the alleged aide of Hapilon as Abu Talja. The bodies of the suspected terrorists were brought to the Philippine National Police‘s Scene of the Crime Operatives.

Two soldiers were also wounded from the clashes inside the main battle area on Wednesday night, according to Col. Romeo Brawner Jr., deputy commander of the Joint Task Force Ranao.

“The deaths of these two significantly reduced the ability of the remaining members of the Maute-ISIS to cause further harm and derail the ongoing return of the IDPs to the controlled barangays in the city,” Brawner said.

Also on Wednesday, barangay officials arrested an Indonesian national believed to have ties with the Maute Group. He was brought to Manila for further investigation.