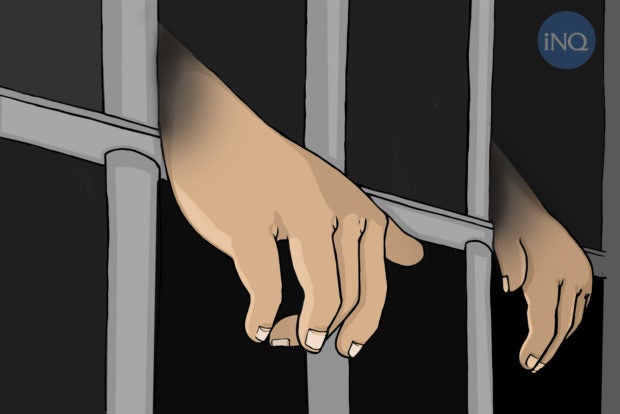 Twenty days after his arrest for possession of illegal drugs, a detained drug suspect was haunted by the harrowing images of the two college students they killed—one of them raped—in Rodriguez, Rizal. This led him to admit the gruesome killing and led policemen to the other perpetrators.

Supt. Hector Grijaldo, chief of the Rodriguez Police, said Mark Anthony Leonador, bothered by his conscience inside his detention cell, told a local reporter in a casual interview last October 26 about the killing of Charmaine Villarias, 21, and John Vincent Umiten, 20, both third year college students of Colegio de Montalban in Rizal.

Last October 4, Villarias and Umiten were both found dead in a sloping, grassy lot inside the Amityville subdivision in Barangay San Jose, Rodriguez.

Both victims were hogtied using shoelaces and their bodies bore stab wounds when found at a spot known to locals as “burol” (hill). Their bruised bodies also indicate that they were struck with a hard object.

The victims’ valuable items were missing.

Leonador then implicated his two companions that night and identified them as Jesus Ubani Jr. and Michael Sales, who were arrested on October 29 and 30, separately, for possession of illegal drugs and concealing deadly weapons during the police’s simultaneous anti-criminality operations, Grijaldo said.

On Monday morning just hours after Sales’ arrest, the suspects, who were notorious robbers in the barangay, were presented to the media by Rizal Provincial Police director Senior Supt. Albert Ocon.

In his testimony, Leonador also told the police that they buried the ice pick used in the killing at the back of his house near a creek, at least a kilometer away from the crime scene, and the pants used by the suspects.

“Minumulto siya ng dalawang bata. He was seeing their images. He had nightmares inside the jail.  He was also afraid he might eventually get killed so he decided to confess,” Grijaldo told the Inquirer.

The Rodriguez Police immediately went to Leonador’s house, positively found the ice pick and the other evidence he was saying, consistent to his narrative. The knife used, however, remained missing, the police official said.

The suspects were also tagged previously as the three of the 15 men listed as “persons of interest” by the Rizal’s special investigation task group. Their names were among the known robbers operating in the barangay, Ocon said.

Through his barangay photo shown by police to witnesses, Leonador was positively identified to be in the area the night the crime was committed.

The other persons of interest who include construction workers and security guards who were near the area during the incident are already absolved from the crime after Leonador’s admission, Ocon added. “We consider this as case solved,” the Rizal Police director said.

Leonador said he and his two companions were drunk that night and had only planned to rob two college students so they could have money for drugs.

Grijaldo said the group’s modus operandi, also known as “Palit Basura,” include robbing the cellphone or wallet of college students and then exchanging those for illegal drugs.

Based on his earlier statement to reporters, Leonador said the two students were held separately by his companions. Ubani then showed interest on Villarias, saying, “kursunada ko ‘to” (She’s my type).

While attempting to rape Villarias, the report said Umiten resisted prompting one of the two men to slit Umiten’s throat that eventually killed him.

In the wee hours of the morning, Leonador said the bloodied Ubani and Sales went to his home, and decided to hide the evidence in his backyard near the creek.

Grijaldo said Ubani and Sales were still in denial when arrested and were pointing fingers as to the incidents of rape and murder. Grijaldo identified Ubani as the one who raped and strangled Villarias to death.

The three are still detained at the Rodriguez Police station and are now facing charges for double murder, Grijaldo said.

Grijaldo said the arrest is an accomplishment in Rodriguez, Rizal province where several robberies happen but were not reported to the police because the victims are scared or do not want to be inconvenienced. /jpv