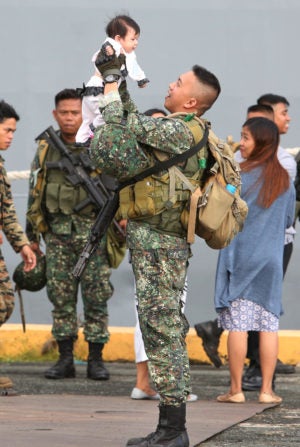 HOME IS THE SOLDIER Cpl. Reginald Dangani,who fought in Marawi City, says he is looking forward to spending Christmas with his 4-month-old daughter, Zia, and his family. —MARIANN EBERMUDEZ

Cpl. Reginald Dangani was fighting pro-Islamic State (IS) terrorists in Marawi City when his youngest daughter, Zia, was born.

His homecoming on Monday morning was a relief to his wife, Zara, and his other children: He was safe and they would spend Christmas together.

“It was so hard to be away from them. Every day, I wondered if I would be able to go home alive. My family was always on my mind,” Dangani said.

Dangani was one of more than 500 Navy and Marine troops who arrived at Manila South Harbor to a heroes’ welcome organized by the Philippine Navy at its headquarters in Manila.

The heroes — including the Navy SEALs and aviators — were transported from Iligan City to Manila on the BRP Tarlac.

Vice Adm. Ronald Joseph Mercado, the Navy’s flag officer in command, lauded the troops as heroes, pointing out that the success of the military over the terrorists in Marawi was due to their bravery.

Combat operations ceased last week, after five months of battle against Maute group and Abu Sayyaf terrorists who seized large parts of Marawi on May 23 to establish an IS enclave in Southeast Asia.

Of the 165 soldiers and policemen killed in the clashes, 36 were from the Navy while more than 300 Navy personnel were wounded.

“Allow me to share with you, half of the success of the Marawi battle were the significant contributions by these sailors and Marines,” Mercado said in his speech.

What they did in the war

Mercado said it was the Marines who retook from the terrorists three bridges—in the villages of Mapandi, Bangolo and Masiu—that were critical to access to the main battle zone in Marawi.

The Navy’s pilots, on the other hand, conducted aerial surveillance, airstrikes on the enemy positions, with the Naval Special Operations Group securing Lake Lanao.

“It is my honor to personally express my deepest admiration and gratitude to our heroes. We prepared for this day because they truly deserve a heroes’ welcome for their return,” Mercado said.

After a brief program at Manila South Harbor, the troops were taken on a motorcade to Philippine Marines headquarters in Fort Bonifacio.

Dangani, a Marine and resident of Makati City, said being away from his family for so long was more difficult than to be in the heat of the war.

“It was so hard to be away from them, my children are still too young. But we all pulled through it,” he said, adding that he was looking forward to spending Christmas with his family.

His wife was beaming with pride for her husband, who was feted as a hero.

“We are very proud and relieved that he was able to come home safely,” Zara said.

Read Next
PNP chief Dela Rosa hints at presidential run
EDITORS' PICK
DOH: 28,471 new COVID-19 cases in PH; active cases now 284,458
On Day 2 of implementation, gov’t says workers now exempt from ‘no vax, no ride’ policy
Over 3 Million worth of prizes to be won at Smart Padala’s SENDali Manalo Promo!
Acer starts the year off strong with the Aspire Vero National Geographic Edition
Metro Manila posts lowest temperature yet this ‘amihan’ season at 19°C
Gear up and get ready to play with Yamaha Mio Gear
MOST READ
Lucky plants to grow in 2022
Derek Ramsay on being married to Ellen Adarna: ‘Gumaan ‘yung mundo ko’
Cristalle Belo on raising her kids in Australia: ‘We set limits’
Unvaccinated has rights but also has limits—DOJ
Don't miss out on the latest news and information.