The Philippine Navy’s marines and sailors who fought the five-month battle in Marawi City returned home to a heroes’ welcome in Manila on Monday.

More than 500 marines, sailors, SEALs and aviators of the Navy were transported from Iligan City to Manila via the BRP Tarlac (LD-601).

“Allow me to share with you that half or probably more of the success of the Marawi battle were the significant contributions by these sailors and marines,” Navy chief Vice Admiral Ronald Joseph Mercado said in his speech.

He said that it was the naval intelligence operatives who provided critical information of the whereabouts of the leaders of the terrorist group from the start up to the end of the siege.

It was also the Philippine Marines who were responsible for retaking the three critical bridges to the main battle area — Mapandi, Banggolo and Masiu. 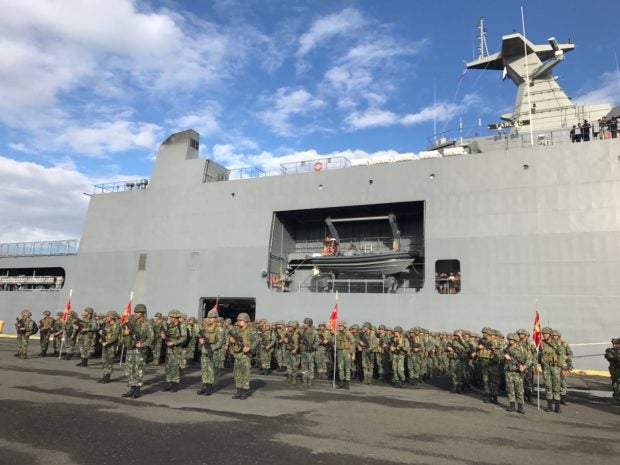 Navy forces arrive from Iligan city and are met with a hero’s welcome after their contribution to the AFP operations against terrorist in Marawi City. CATHY MIRANDA/INQUIRER.net

“The control of the three bridges allowed swift movement of soldiers and combat vehicles to the main battle area,” Mercado said.

The naval pilots, meanwhile, contributed to aerial surveillance day and night, as well as airstrikes in the enemy’s positions. The Naval Special Operations Group sealed off the city through their maritime operations in Lake Lanao.

“This prevented the use of the lake as a logistics highway, an entrance for reinforcement and escape route for the terrorists,” the Navy chief said.

The arriving troops were later taken to a motorcade to the Philippines Marines headquarters in Fort Bonifacio after the ceremony. The Navy’s AgustaWestland 109 also dropped flowers from the sky during the motorcade.

“It is my honor to personally express my deepest admiration and gratitude to our heroes. We prepared for this day because they truly deserve a heroes’ welcome for their return,” Mercado said.

Over 900 terrorists and 45 civilians were killed from the conflict while more than 400,000 were displaced from the battle between government troops and ISIS-inspired terrorists.

Of the 165 soldiers and policemen killed, 35 were from the Philippine Marines. /je